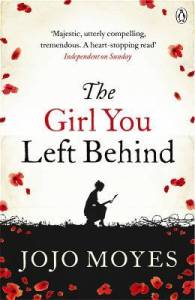 There a was story in the news recently about the claim by two Polish men that they know the location of  a mysterious Nazi Ghost train which disappeared  at the end of the second world war. The train which  is supposedly laden with gold, gems, art work and weapons was hidden by a special German unit fleeing the advancing Russian forces at the end of the war, when it was parked in a long forgotten tunnel in Poland and blocked up. Add to that the discovery, 2 years ago, of a horde of stolen art in the walls of a Munich apartment and the success of the movie The Monuments Men last year, you’d wonder why very little is heard about art being stolen during world war one. Quite simply the Treaty of Versailles catered for repatriation of stolen art, were as this wasn’t the case after WWII. One of the pieces found in the flat in Munich was “Woman in a Chair” by the French artist Henri Matisse, this could have been the inspiration for this month book, “The Girl You Left Behind” by JoJo Moyes (www.jojomoyes.com).

The book starts in France midway through First World War. Sophie Leferve is running her family’s hotel the Le Coq Rouge in the northern  French town of St. Perrone not far from where the battle of the Somme is raging. The town is under the control of the German army and it’s brutal rules and regulations. Shortly after arriving in the town the local German Commandant orders the hotel to be used as a mess for

Woman Sitting In A Chair by Henri Matisse

his officers and one night after eating the commandant discovers a portrait of Sophie painted by her husband Edouard,  a well known artist,who is away fighting the Germans on the front. The commandant immediately falls for the painting. A couple of weeks later after hearing Edouard has been captured and held prisoner Sophie secretly approaches the commandant and attempts to trade the portrait for her husband’s safe return. But in an apparent  misunderstanding she is arrested and taken away to an unknown fate.

Jump forward ninety years to  London 2006 and Liv Halston a young widow is struggling to stay on top of her mounting debts and living in a large state of the art waterfront house designed by her late husband. In the master bedroom hangs the portrait of Sophie Leferve titled “The Girl you Left Behind”. While out on drinking session on her husbands anniversary, her bag is stolen. That’s when she meets Paul McCafferty an ex- new york cop and now a stolen art specialist, they fall for each other then one night she brings Paul back to her place and he discovers the painting in the bedroom. Paul’s company has been hired by the Leferve family to find the painting that went missing during the war. The star crossed lovers thus find themselves on opposing sides of a bitter custody battle for the painting. Can Liv retain ownership or will “The Girl You Left behind” make it back to France? What is the real story about how the painting ended up on the other side of the English channel and what ever became of Sophie? Will Liv and Paul’s relationship survive the court case?

My initial thoughts on the book were that it was a bit disjointed. The first part is a gripping story about a family surviving under the suffocating tyranny of German occupied France. This pulls you in from page one and then unceremoniously dumps you into the present day without so much as Delorian and a flux capacitor. For the first couple of pages after this transition I was lost, wondering had there been a printing error. But alas no, it was planned. What Moyes has tried to do is marry together an eerily accurate war story with a piece of “Chick-Lit” and  some day time TV court room drama thrown into the mix for good measure. But this  she does with masterful aplomb, that shows what a skilled seasoned writer can do with the literary ingredients of Ready Steady Cook.

The second part of the story does come across rather ‘Rom Comie’, owing primarily to romance being Moyes’s preferred genre. If it were made into a movie it would have Hugh Grant’s and Richard Curtis names all over it but after the cold hard realities of occupied life, this is a warm and humorous  tale, which does get interesting when the tug of war court room drama kicks in. Then you start rooting for Liv to win, but also secretly for her romance with Paul to survive. You have to feel sorry for Liv, she’s a real down on her luck young widow struggling to get over the loss of her husband. Despite starting out as a difficult transition , this quickly re covers to deliver a charming well blended tale stretching across a generation and two wars.

This is the first book of Moyes’ that I’ve read, although I’ve been aware of her for a while, mainly because being an Everton supporter, I noticed she  shares her surname with one of our great managers. This is the ninth book of thirteen, the thirteenth “After You” is due to be published at the end of September 2015. The former journalist and Arts correspondent started writing in 2002 with her first novel Sheltering Rain, the others include Foreign Fruit (Windfallen – U.S.) 2003, Ship of Brides 2005 and  Me Before You 2012 of which her thirteenth book is a sequel.  Her big claim to fame is that she is one of a small group of authors who have won the coveted Romantic Novelists’ Association’s Romantic Novel of The Year Award twice.

So, if like me, the unrelenting news of about the ongoing migrant crisis in Europe is getting you down. Pop into your local  book store or download a copy of this book and lose yourself in a unique blend of genres from an acclaimed British writer.

Sitting out in the Atlantic almost aloof from the rest of the continent at the northerly tip of Europe, is the island of Iceland. Despite what the name suggests, Ice is scarce compared to it’s neighbour Greenland.  Another rarity in Iceland is Crime, according to a report by a global study on homicide published 2011 by the UN, Iceland’s homicide rate never went above 1.8 per 100,000 head  of population annually over a  ten year period between 1999-2009. Thus it took an Antipodean, to delve into the annals of Icelandic history to find a crime with an interesting tale. That’s this months book – Burial Rites by Hannah Kent (www.hannahkentauthor.com).

Iceland, 1828. A closed rural society governed from far-off Denmark. Two men are murdered on a remote farm and their bodies partially burnt. The shock vibrates throughout the whole country.  An example must be made of the murderers. They must be executed. One of them is Agnes Magnusdottir, a 33-year-old maid-cum-farmhand.

There is no executioner or executioner’s axe in Iceland. A blacksmith is commissioned to make the axe. A farmer must be trained to carry out the beheadings. Meanwhile, Agnes is lodged with a crofter’s family (there are no prisons in Iceland, either) – a family who does not at all welcome the idea of having a murderess in their midst.

Based on these actual events, “Burial Rites” tells Agnes’ story.

Historically, Agnes Magnusdottir was the last woman to be executed in Iceland for the murder of her employer and lover,

Natan Ketilsson, and a farmhand, Petur Jonsson.  The murders and the subsequent execution of Agnes and one of her co-accused, Fridrick Sigurdsson, are knitted into Icelandic history and folklore with Agnes generally being portrayed as “an inhumane witch, stirring up murder”. In writing this novel, Hannah Kent set out to “supply a more ambiguous portrayal of this woman”. In this she succeeds admirably.

Reconstructed from historical documents and re-envisaged, Hannah Kent’s Agnes was born the illegitimate daughter of a servant girl. At age six her mother left her with “A lie for a father. A head of dark hair.  A kiss. A stone so that I might learn to understand the

birds and never be lonely”.  At age eight her foster mother died in childbirth and she was “thrown on the mercy of the parish….a pauper. Left to the mercy of others whether they had any or no”. At fourteen, the confirmation records of the parish describe her as having “an excellent intellect” – an intellect that Agnes subsequently decries as being responsible for her predicament. “If I was young and simple-minded, do you think everyone would be pointing at me? No. They’d blame it on Fridrick ….But they see I have a head on my shoulders, and believe a thinking woman cannot be trusted. Believe there’s no room for innocence”.

Be that as it may, it was undoubtedly Agnes’ intelligence that attracted the attentions of Natan Ketilsson, the murder victim.  Agnes fell in love when Ketilsson, a notorious non-conformist and freethinker, singled her out while visiting a farm where she worked because “he could not read me”.  Having become lovers, Ketilsson asked Agnes to move to his farm as a housekeeper. On her arrival, however, she realized that another servant girl, 15-year-old Sigga, was already installed as housekeeper – and in Nathan’s bed! Was it rage and jealousy at this that drove her to stab Ketilsson when the opportunity presented itself? Or, as she insisted, was it Fridrick that killed him and forced her (and Sigga, who’s sentence was commuted to life in prison) to set the fire to cover it up? We are left with this ambiguity.

While Agnes’ story is compelling, the way Kent unfolds it makes it truly absorbing.  We gradually glean all of this while Agnes is spending her last months working on the small-holding of District Officer Jón Jónsson, his wife Margrét and daughters Lauga and Steina.  In the cramped living space of their croft – where everybody, including Agnes and the farmhands, sleep in a communal ‘badsofa’ – little can be kept private. So it is that Agnes’ conversations with her confessor, Toti, a pastor nominated to “prepare her for her meeting with the Lord” are largely overheard.

Initially horrified, the family gradually soften towards Agnes, realizing that, far from being a dangerous criminal, she is very much a product of the harsh, subsistence-living, farming community that they share. Little-by-little, as Agnes displays her skills at farming and domestic chores and as they hear her story, their dismay dissolves, first into pragmatic acceptance “just as well we’ve an extra pair of woman’s hands about the place” and then to respect, compassion and kindness. Particularly poignant is the description of Margrét, the night before the execution, laying out her best clothes for Agnes to wear in the morning.

Throughout, the narrative is interspersed with vivid descriptions of the wild Icelandic landscape, the harsh weather and the hardships of the community’s subsistence existence. All of which serve to convey a bleak and unforgiving backdrop against which the humanity of the main characters shine. 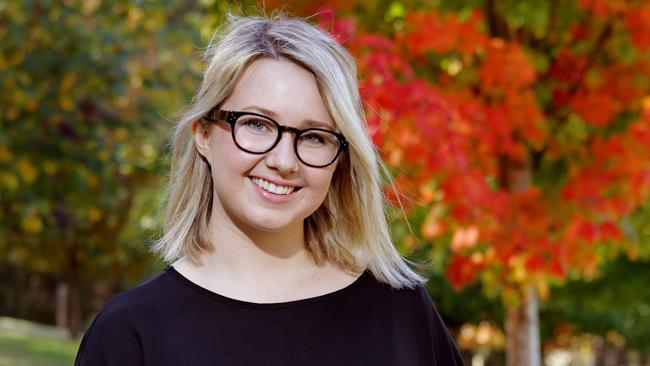 What makes this truly astonishing is that (1) Hannah Kent is Australian (2) this is her first novel and (3) she was 28 when it was published and – as you can see from her photograph – she looks 18. Eat your hearts out all aspiring writers (Don’t you just HATE her!). I suspect we’ll be reading a lot more from Ms Kent in the future – a wonderful prospect!