How many pairs of shoes do you have? Two, six, twelve, more!!! Are you in the Imelda Marcos league? We’re led to believe most women are and some men too. I have four which I wear regularly, two pairs of runners, a tatty and well worn pair of shoes for work and a casual pair of shoes for… Well, going out casually in. Then there are the two dressy shoes. But one thing I can say is they are all comfortable. Which according to the Chinese philosopher Chuang Chou is important, “As long as the shoe fits, you don’t think about the foot…”. It is often said that there are opera singers around the world who don’t care what directors or conductors think as long as the shoe they wear is comfortable, that’s all that matters. We learn this from last months book group read, “Italian Shoes” by the Swedish author Henning Mankell, a writer more associated with Crime fiction then the book we have before us.

Italian Shoes follows a year in the life of retired surgeon Frederick Welin, who lives a reclusive existence on an Island off the Swedish coast. When across the frozen sea one morning he sees an elderly woman with a Walking frame slowing making her way towards his house. She stumbles and falls, when he goes out to help he discovers it is Harriet, his first real love, whom he abandoned forty years earlier.  She’s tracked him down because as a dying wish she wants him to follow through on a promise he made all those years ago. To take her to a mysterious lake hidden deep in the forests of northern Sweden. The journey awakens old memories, and brings him into contact with the daughter he didn’t know he had, as well allowing him to confront the ghosts of the terrible event which cost him his career and drove him to the solitary life he now leads. Never again will his quiet little island be the same after this year. 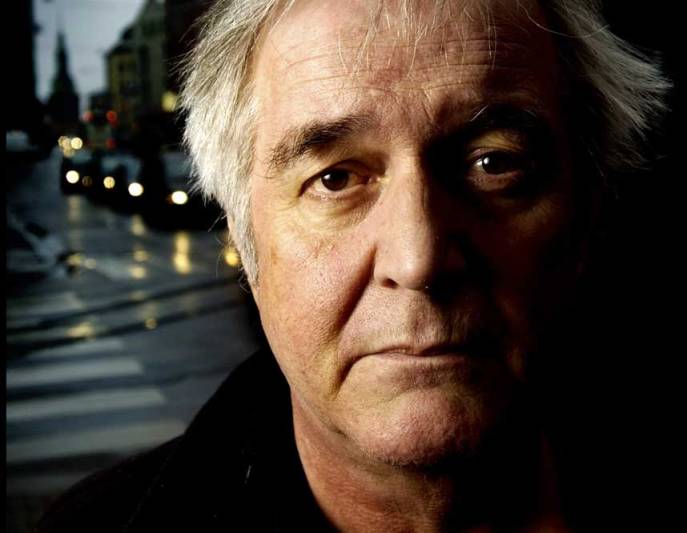 Before reading this book I thought Henning Mankell, was just one of the new wave of unknown Scandinavian crime writers who was following in the ground breaking exploits of Steig Larsson. Who have now found a hungry new audience beyond their homelands borders. Just think, ten years ago, you were a very broad minded person if you read Scandinavian crime novels or a linguist with a passion for Swedish or Norwegian. Now, like their furniture hypermarkets, you can’t turnaround but you run into the latest crime novel or TV drama from that part of the world. They’ve even spawned a genre – Scandi Noir/ Nordic Noir and like Starsky & Hutch a trend in woollen knitwear. But Mankell is best known for his Kurt Wallander series, which was made into a UK crime drama staring Kenneth Branagh. But he’s more prolific then that.  He’s written twelve Kurt Wallander books, seventeen non Wallander novels including “Italian Shoes”, eight children’s books, four original TV screenplays as well as forty six plays… Good god he’s a machine! Although the 68 year old does have an emotional side, he wrote a crime novel with Wallander’s daughter Linda in it, which he planned to turn into a trilogy, but after the actress who played her in the Swedish version of the series took her own life, so distraught was he that, he didn’t complete the trilogy.

When you’re used to reading one type of work by an author, and then they go and write something totally outside their comfort zone or genre, or better still if they change their style of writing from lets say first person to third, you can often find it really hard to read anything else they write. I’ve done this in the past with Patricia Cornwell, after around her tenth book she changed her style of writing, I haven’t been back since. With Mankell it was different, I’d never read any Wallander, although I knew who Mankell was and that he mainly wrote crime drama, or so I thought. So when this book was presented, I was very intrigued and excited at the prospect of reading it.

The book is refreshing; it reads and looks like a small book, but at almost 360 pages it’s about the average size. The pace is delivered by a master storyteller who seems to be able to make

even most mundane thing sound interesting. It’s a simple story of a man living on an island with his ageing dog and cat, then throw in an ant hill in his guest bedroom for a bit of quirkiness, his ex girlfriend turning up terminally ill and requesting he take her to a mysterious lake in the wild of Sweden and already your wondering what the hell is in store, your always trying to guess what’s around the next corner, when is he going to fall back into murder mystery territory. But no, Mankell tells a wonderful tale of long lost love that never really died, even if it did seem a bit of a well worn subject. While also examining what goes through the minds of people who are in the twilight of their lives.

The only real downside to this book is the title. The “Italian shoes” in question are only really mentioned in a ten page piece midway through the book and seems to have no real bearing on the story. Thus I’m putting it down to something lost in translation; maybe the original title translation from Swedish into English was even more obscure.

So if you’re looking for a nice easy read, you can’t go far wrong with this book from a Swedish writing juggernaut. Put on your most comfortable shoes and walk down to your nearest book store and pick up a copy or slip into your comfy slippers and down load it to your eReader.