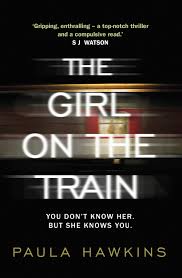 Trains and romance have always gone hand in hand and so have trains and mystery. Take the Orient Express, Midnight express, the Great Train Robbery and the Railway Children for example. Then there’s train journeys in general which, just by the mere thought of them, spark ones imagination, the Rocky Mountaineer railway, the Trans-Siberian, even the Eurostar. Commuter trains are no exception, although the daily trip on the DART (Dublin Area Rapid Transit) which links the city centre with the north and south coastal towns and counties, that I’ve taken for the past 20 years or so, doesn’t really have the same inspirational spark as the London underground,  the Metro in Paris or the New York Subway. Although, there are people in those countries who would disagree and would probably give their eye teeth to have the view over Killiney Bay twice a day, instead of the dark ominous brickwork of a tunnel,  I usually have my head stuck in a book. This brings us on to this month’s book.  It’s the current talk of the literary world, and has being suggested as this years “Gone Girl”, it’s The Girl On The Train by Paula Hawkins.

Rachel Watson takes the same train into London every morning and the same train home again every evening. It stops at the same signal each way and over time she gets to know the routines of the people in the houses that she over looks as the train idles there before moving on. So engrossed in the lives of one couple in particular is she, that she has even given them names Jason and Jess. One day she sees “Jess” in her back garden embracing a man not “Jason”. But the coincidental stopping of the train at that  point is not the only reason for Rachel’s interest in those particular houses, she used to live a couple of doors down, before her marriage broke down and now two years on, she’s struggling to get over the break up, which isn’t helped by her alcoholism. One evening she gets off at the nearest station and in a drunken stupor causes a scene at her old home. Coincidentally Megan Hipwell, the neighbour whom Rachel has Christened “Jess” goes missing goes that night – in the aftermath Rachel can’t remember what happened. Just hazy flash backs, which include her ex-husband Tom, his new wife Anna, a man with red hair, as well as waking up next morning bloodied and bruised. Thinking she has vital evidence she decides to go to the police and with her life spiraling into alcoholic oblivion Rachel blunders further into the investigation, when Megan’s body turns up a couple of weeks later. Is Rachel the killer or has she met them and is she about to be their next victim?

The word on the grapevine was that this was a great book to read and I have to say, it was correct. From the get go, Paula Hawkins builds the tension up superbly in the style of the great British thriller writers of the past. Agatha Christie and the recently departed Ruth Rendell would be very proud. The book is told primarily through the eyes of Rachel, but also from the point of view of Megan Hipwell and Anna Watson, the new wife of Rachel’s ex Tom.  At no point can you tell who the killer is until the very last minute. Every one of the main Characters is a viable suspect; it’s been years since I’ve read a book that has left me guessing till the last couple of pages. Also the initial premise of the story, that of what you see in peoples houses when you stare in fleetingly from a passing train, is not something new to any of us. We’re all “Nosey-Parkers”  deep down and we’ve probably see some strange things going on in peoples houses and often wondered what those people are doing, who lives in a house like that or why did they do that to their house or garden?

Its also been a while since I’ve come across such a flawed main character, her alcoholism is so nicely woven into the story-line that you really do feel for Rachel and almost want to step into the pages and take her by the hand and lead her to an AA meeting or pump her full of Coffee. As well as destroying her marriage, it’s also cost her a lucrative PR job in the city, but she still takes the train every day so that her flatmate Cathy thinks she still has a job. It’s Cathy who is her real and only support, despite being the recipient of all the general detritus associated with Rachel’s condition, although her patience is tested and  a sainthood is lurking somewhere in the ether. 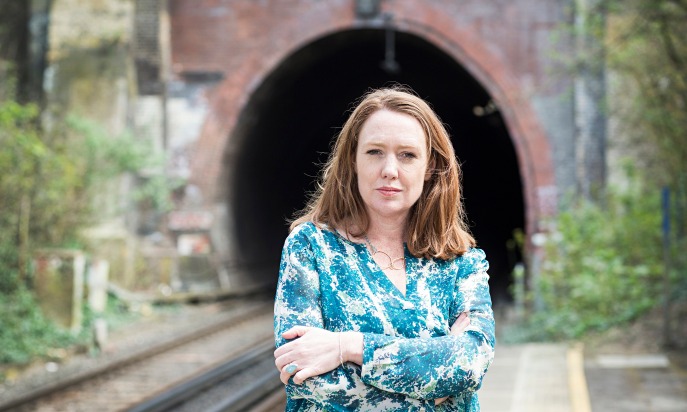 Zimbabwean born Hawkins (www.paulahawkinsbooks.com) has been working and living in the UK since 1989. She’s a former journalist who credits reading Agatha Christie as a child as her inspiration, but that it was Donna Tarrt’s Secret History which was the real eye opener to the possibilities of psychological thrillers. This is her first book, but in a recent interview with Penguin Canada she admitted she has hundreds of pieces of fiction stored on hard drives, some a few pages long others tens of thousands of words long.

book but the closest is Agatha Christie’s The 4:50 From Paddington. The plot is scarily similar, two trains pull along side each other and a woman travelling alone in her carriage witnesses another woman being murdered in the other train, the only person who can help her is that wiley old sleuth Ms Marple.

So the next time you stare out the train window into houses along the way or another train, be careful what you see, you never know you could be witness to a crime. But in general just smile and wave, even if nobody returns the gesture. Then if you haven’t already, been prompted by this review to get a copy, then jump off at the next available station and pick up this book.