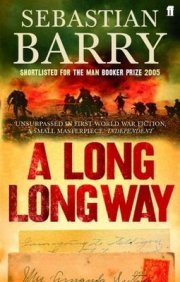 “IRISHMAN AND IRISHWOMEN: In the name of god and the dead generations from which she receives her old traditions of nationhood, Ireland, through us, summons her children to her flag and strikes for her freedom…” The opening lines of the proclamation read by Patrick Pearse from the steps of the General Post Office in Dublin on Easter Monday 1916.

If you are Irish, have any Irish blood or tenuous connection to the emerald Isle and are looking for a  book to mark the 100th anniversary of 1916? One that evokes the complexity of the time rather than a flag-waving polemic or a nostalgic romp? Then this months book should definitely be top of your list. Its Sebastian Barry’s “A Long, Long Way”.

Published in 2005 by Faber & Faber  www.faber.co.uk  (and shortlisted for the Man Booker prize that year) Barry’s novel stands head-and-shoulders over the many recently published books on all conceivable aspects of the time.

It has no heroes. No impossibly romantic figures who bestride history with emotion-stirring rhetoric or valiant deeds. It tells the story of Willie Dunne, a young Dubliner who had the misfortune to be born in 1906.

When we first meet Willie he is seventeen, working as a builder’s apprentice and in love with Gretta, the daughter of a man who has been blacklisted because of his involvement in the 1913 lock-out.  Willie’s father is a superintendent in the Dublin Metropolitan Police and, to both Willie’s and his father’s disappointment, Willie has not been able to follow in his footsteps because he doesn’t meet the six-foot height requirement to join the constabulary.

Despite this disappointment, Willie enjoys building work and looks forward to a future with Gretta – a future woven into family and place, like his father and grandfather before him.

But the world has different plans. 1914. The “Great War”.  Able-bodied young men wanted 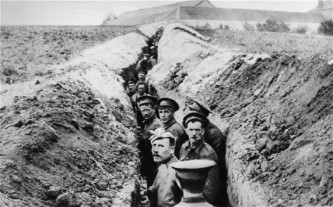 to join the Royal Dublin Fusiliers. For Willie it’s the chance to don a uniform – “if he can’t be a policeman, he can be a soldier” – and to gain his father’s approval.

So, at 18 off Willie heads to war, waved on by cheering crowds. And like the millions of other young men of Europe who headed to war, what awaits Willie in Flanders is the unimaginable squalor, futile slaughter and desolation of the trenches.

Barry’s description of the unconscionable horror of trench warfare is realistic, evocative and, at times, poetic. But overall it’s impact is an echo of the many other poets and writers who have gone before. Sasoon, Remarque (All Quiet on the Western Front) and, more recently, Pat Barker’s Regeneration Trilogy have so exquisitely – and excruciatingly – mined this material that Barry has little to add.  But the inhumanity and terror of the front is only a part of Willie’s undoing.

Unlike their other British and French counterparts, for Willie and many of the hundreds of thousands of  Irishmen who were waved off to war by cheering crowds, a return to cheers, gratitude and appreciation of their sacrifice was not to be. Fate had another curved ball to throw at them. The 1916 Rising.

How the Rising affected the men fighting in Flanders, as experienced through Willie Dunne, is the unique perspective that Barry brings to this aspect of our history.

“And in from Ireland trickled the names, every day two or three, of the executed, sending some Dublin men into sore dances of worry …………..and the precious cargo of their children tormenting them, calling to them to return home. And they could not”

Barry lays on the unsettling and disturbing effect of the Rising a bit too thickly when, 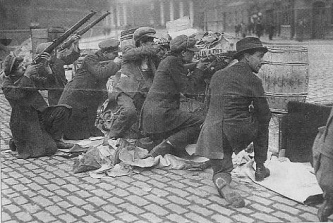 highly implausibly, Willie is called up to take part in a battle against the insurgents while on his way back from brief leave in Dublin. Even without this clumsy episode, Willie’s experiences at the front could not fail but to prompt  questions about his own identity and sense of belonging: One of his company is executed for refusing to fight in a British uniform in protest at the killings back home; English officers treat him with disdain because he is Irish; ‘fellow’ soldiers regard “the Irish” as suspect. In effect, Willie and his Irish comrades are good for cannon fodder, but can’t really be trusted.

In a letter home Willie refers to his sense of ambiguity about where his loyalties lie. As soon as the letter is sent he realises he has made a mistake – his father, who has spent his life defending the realm, will be infuriated. And he is – so much so that, when Willie is next on leave his father refuses to see him or let him stay at home. On this leave Willie also finds that Gretta has married and had a baby. He is spat on by street urchins because he is wearing a British army uniform.

“He knew he had no country now………..he feared he was not a citizen, they would not let him be a citizen” His country had “dissolved behind him like sugar in the rain”.

His home now was at the front, with the small band of Irishmen who had been through what he had been through. Who knew what it was to belong only in no-mans-land. Willie returned to inevitable death because he had no place else to go – and no future to hope for. 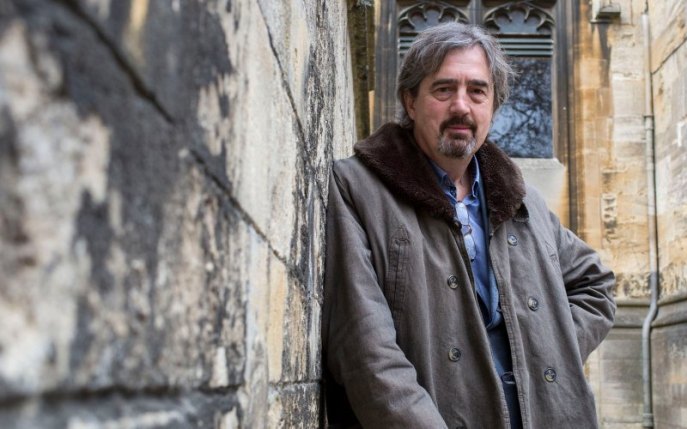 The Long Long Way, is the fifth of Irish author Sebastian Barry’s ten books, which include Macker’s Garden (1982), The Engine Of Owl-Light (1987), Annie Dunne (2002) and The Secret Scripture (2008). He’s also written fourteen plays and two collections of poetry. He’s held academic posts in the US and Ireland and now lives in Co Wicklow. He not only has a magic touch when comes to his literary career but also in his family life too having christened one of his three kids Merlin.

In any context Barry’s depiction of Willie Dunne’s short life is a powerful portrayal of how the circumstances of a time can take over and destroy lives.  In the context of remembering 1916 it is particularly poignant – and a reminder that many Willie Dunnes were dispossessed of a country, of place to belong, through no fault of their own.

Those who did survive and return to Ireland faced such social antipathy that, in effect, they were not allowed to refer to their past. In our book club discussion four people had stories of family members who kept their role in the first – and second – world wars secret for fear of being labelled ‘traitors’.  It is only in this generation that the Willie Dunnes, or more accurately the descendants of the Willie Dunnes, have been allowed to tell their stories.  In a small way the nomination of “A Long, Long Way” as Dublin’s 2007 One_City_One_Book marked a welcoming back to Dublin of all those Willie Dunnes.

You smug-faced crowds with kindling eye
Who cheer when soldier lads march by,
Sneak home and pray you’ll never know
The hell where youth and laughter go. (Suicide in The Trenches – Siegfried Sassoon)