In a little over 6 weeks time, one of the smallest countries in the world, with the largest diaspora celebrates its annual holiday. I am of course referring to Ireland and St. Patrick’s day, which is celebrated almost the world over. While this weekend sees one of the largest countries in the world with an equally wide spread diaspora celebrate its New Year, four weeks after the rest of the world. That is China and the arrival of the year of the rooster. This month’s second book  is  written by a Chinese writer, something I wouldn’t normally get much chance to experience, unless of course, like me  you’re in a book group, which is how I came to read this. The book is Balzac and the Little Chinese Seamstress by Dai Sijie, published by Vintage publishing in 2002 (www.vintage-books.co.uk).

The book tells the story of two teenage boys Ma Jianling and Luo Min  – sons of doctors, who as part of Chairman Mao’s re-education program, are sent to the wilds of rural china to knock the elitist well educated corners off them. Here they are put to work in the paddy fields, down mines, doing back breaking hard labour and other menial tasks. They are treated with disdain by the town elders and their poor and uneducated subjects but from the outset the two boys prove they can offer more than just cheap easy labour. One of them plays a violin, while the other is a fantastic story teller and they are soon given the additional task of going to the local city to watch the films and re-enact them to the locals. During their first couple of weeks traipsing back and forth across the foothills to and from the their daily back breaking chores, they meet a local travelling tailor and his beautiful daughter – whom Lou starts to court. Shortly after that  they discover a friend known as “Four Eyes,”  has a stash of forbidden 19th century European novels in a suitcase under his bed. They borrow one of the books and as they educate the young seamstress in the writing of Balzac, they realize she wants to hear more and so they set about planning to liberate the suitcase and its contents from under Four Eye’s bed. Will they succeed? Will the elders discover the books and burn them, or will their re-education program come to an end sooner? Will Lou and the little seamstress – end up happily married.

I didn’t know anything about Mao’s “Re-Education” program. Not until I opened the book and started reading, did  I realize it was part of the Cultural Revolution and was more commonly known as the “Up To The Mountains, Down To The Countryside Movement”. Through this program the People’s Party under Mao set about ridding the country of capitalist influences, by sending an estimated 17 million young people from the large cities to rural hard labour camps between 1966 – 76. 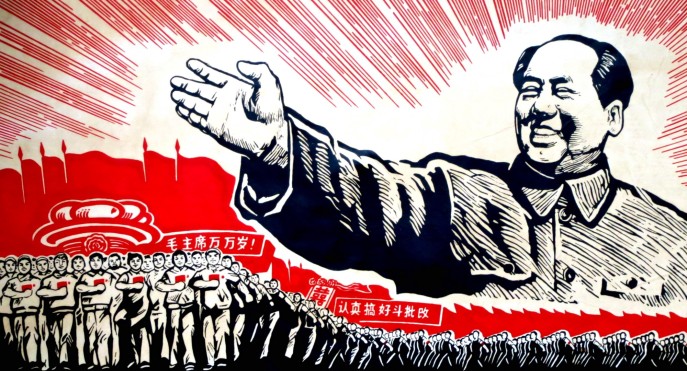 The book is very short. At only one hundred and seventy pages it is a classical novella, so theoretically there is no reason this can’t be read in one sitting. Of the two main characters, we only really get to know the name of one Lou – the other one never reveals his name and if he does it is a fleeting reference (it was only through research of the film did I find his name in the credits). The story is educational and well written and documents perfectly the coming of age and re-education or widening of every character’s knowledge from the little seamstress’s exposure to literature to the boy’s introduction hard labour and the joys of romance as well as sex.

Dai Sijie was born in china, the only child of two medical professors under the Re-Education program he was sent to rural Sichuan. Although, as an only child he would have

been exempt, but he went any way to experience the spartan lifestyle. On his return after 4 years, he became a lecturer in art in 1974. In 1984 he moved to France on scholarship where he still lives today. There he developed a liking for writing and  directing films. Balzac and The Little Chinese Seamstress ( Balzac et la petite tailleuse chinoise) was the first of two books he’s written and his experiences in the re-education camp are the inspiration for the book. His second book Mr Mouch’s Travelling Couch ( Le Complexe de Di)  was published in 2003. It was translated into English in 2005. He made Balzac And the Little Chinese Seamstress into a movie in 2002, he has made five other films since.

Sijie does for the Cultural Revolution through this book, what the likes of Schindler’s List, The Boy In The Stripped Pyjamas and The Book Thief for example did for the brutality of the Nazi regime. Lift a small stone and shed a very big light on it. Although compared to Schindler’s List – Balzac and The Little Chinese Seamstress is a laugh out loud comedy. Though, this is not to denigrate the experiences of those who survived the Re-Education camps. Sidjie has put a rather fluffy feel on a very arduous and harrowing period in Chinese history.

So buy or download a copy of this book, then as you decide what’s for dinner, maybe opt for Chinese take away with  traditional New Year’s Moon Cake, and settle down for both an educational and hugely enjoyable romp through the Cultural Revolution. Xinjian Kuaile…