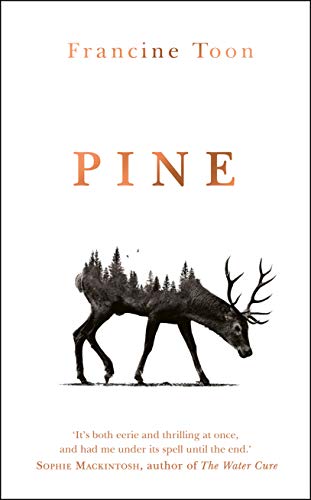 In my twenties and thirties, I spent pretty much every free moment in Scotland. I was a bit of a Scotland-ophile. I think I knew more about the history and folklore of Scotland than of England. I was therefore surprised not to recognise I was in Scotland during the opening pages of this months second book review, but instead thought the book was set in some remote American state.The book is Pine by Francine Toon and is published by Doubleday (https://www.penguin.co.uk/company/publishers/transworld/doubleday.html) on the 23rd January.

In the story we meet Lauren, the main character, whose mother disappeared almost ten years ago. Father and daughter live alone in a remote highland village surrounded by pine forest. Lauren uses her tarot cards to hopefully find the answer to her mum’s disappearance and the secrets in her dads turbulent mind, while the locals know more than they’ll admit.

When a local teenager goes missing, it’s no longer clear who she can trust. She lives in this isolated Scottish community where everyone seems to be hiding something. Strange things seem to be happening, omens and paranormal activity. Are these all part of the loss and day to day struggles Lauren and her father face? Or this there something more sinister at play?

The realisation that I was reading a book set in Scotland dawned on me with a jolt quite a few pages in. The reference to Moray Firth radio had slipped under my radar amidst the references to pick-ups, trick or treating and Aerosmith. The Scottish names didn’t even seem out of context due to the large Scotland to American emigration of previous centuries. So then I wondered is this an American author? No, wrong again! Francine Toon is a Scot. Maybe I should read the backcover blurb occasionally, you might suggest? But its interesting to avoid doing that and just take your impressions from the story itself. Its illuminating to realise how often the blurb misleads or would have occasionally had led me to dismiss a great book altogether. Its not something I practice religiously, especially having been caught out by great “unfinished” novels before.

Anyway, Pine is complete. No worries there. The book its self is a gem of a find. A satisfying ending concludes a long and twisting journey. It’s difficult to know whether to class it as a thriller, murder mystery, supernatural tale or modern fairy-tale as it encompasses all these genres. There were a few modern references which linked it to recent times but I felt it could have been set in previous decades quite easily as the story seems quite timeless in many respects. The father raising his child alone, a small town full of gossip, bullies, a sense on foreboding with the addition of supernatural phenomena and legend.

I’ve noticed there seems to be a current, Game of Thrones inspired penchant for all things fairy tale, legend and mythology, or my husband should vary his book choices a bit more. I’ve recently reviewed Fox fire and Wolfskin, a collection of modern feminist fairytales by Sharon Blackie and Lancelot by Giles Kristian about the eponymous mythical Knight. Plus scanning the Goodreads top books for this month alone, I find about a quarter of them could be said to have foundations in myths, fantasy and folklore. However, although this is Francine Toon’s first novel, her previous poetical prowess means her writing is assured and atmospheric. The book is intense and absorbing.  Again, if I’d read the blurb before beginning, I might have been agitated that the disappearance of the teenager it mentions doesn’t actually occur until the book is three quarters over but Toon is building empathy with her main characters and immersing you in their world. I could feel the cold, smell the smells and felt my heart sink as the world spun out of control after the disappearance, when suspicion and rumour started to take hold.

This is Scottish born author Francine Toon’s (www.francinetoon.com) Debut novel. She’s used to having poetry published in The Sunday Times and various anthologies, under the name Francine Elena. Her day job is a commissioning editor for Sceptre Books, while working and living in London.

My only reservation was whether Lauren’s mother would have local suspicions of witchcraft with her new age thinking, crystals, massage and tarot cards in this modern age. I suppose she certainly would have been seen as exotic and odd in a remote community. It was the only thing that jarred slightly. As I’ve mentioned on Library Door before, My mum thinks Yoga is ‘out there’ and hippy so maybe I’m putting my own fairly open minded perceptions about the supernatural into that opinion.

A fairy tale start to the year from Francine Toon. Sinister, gothic and a little bit scary, like all the best stories. I note its already been recommended as the read for January by the Irish Independent. I’m sure it will do well. So, get down to your local book shop and snap up a copy or conjure it up online and start reading it before the stretch in the evenings get longer and the ideal atmosphere for this book is then at midnight under your duvet with a torch.

This review is part of a Random Things Blog Tour, to see what the other reviewers thought, visit their blogs listed below. Then if you get a copy ,comeback and tell us what you thought, we’d love to hear your feedback.

2 thoughts on “PINE, NEEDLES INITIALLY, BEFORE SPELLBINDING THIS READER”