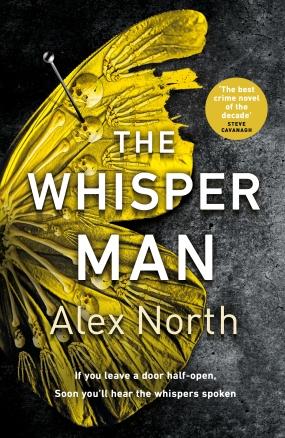 “If you leave a door half open, soon you’ll hear the whispers spoken”

We all have those rhymes or tunes which stick in our head and can become annoying; ‘ear worms’, as they are known in modern parlance. Sometimes a few evocative words, somehow familiar but out of context, will send you back to a moment in time, elicit a strong, visceral reaction or a sense of déjà vu. We don’t really understand how the human brain works to protect us from dangers or how our senses and bodies can act in an extraordinary manner when faced with danger. Maybe those instances of heightened sensitivity, foreboding feelings and ghostly warnings are just the chemical reactions in our brains, trying to help us.

This month’s book review is The Whisper Man by Alex North and published by Penguin Michael Joseph (www.penguin.co.uk/company/publishers/michael-joseph.html ) on 13th June, has two of my favourite things combined: crime fiction and the supernatural. I’ve always been fascinated by murder mysteries, serial killers and evidence of the paranormal since childhood. Jake, the child in this story has an imaginary friend. Common in only children, I had one myself , Caroline,  who had to have a place set for meals and took tea with me in my Wendy house.  Jake’s however, appears a little more sinister. She makes him repeat the rhyme, “if you leave a door half open, soon you’ll hear the whispers spoken”.

Jake and his dad, Tom have just moved to strange looking house in Featherbank village,

to make a fresh start after the sudden death of Jake’s mum. Jake is understandably traumatised, and Tom is struggling to deal with his own grief and to form a good relationship with his son. Jake is a sensitive child but appears to be regressing into his own world and talking to an invisible person, who he says he hears whispering to him at night. Unbeknownst to them, Featherbank was the scene of a series of child murders some fifteen years earlier, by a killer known as The Whisper Man. He was caught and jailed. When another boy goes missing under mysteriously similar circumstances, the police revisit their investigations and Jake appears to be being targeted as the next victim. What links Jake and Tom to the investigation? Who is Jake’s ghostly friend? Is the whisperer real or a nightmare?

This book moved between the police investigation and the story of Jake and Tom’s attempts at recovery from traumatic loss very smoothly. Overall, I felt this was a book which looked closely at the relationships between fathers and sons. We are often more like our parents than we’d like to admit. Some of that can be due to nature and some to nurture but this book showed that while some men fall into repeating the sins of the father as it were, some do manage to overcome genetics and poor childhoods and blossom. This may all sound a bit deep for a crime novel but the characters are in the main, beautifully drawn. We get inside the heads of the men here. The women are support acts but good ones.

This is the first book by British author Alex  North (@writer_North), although not his first foray into  crime fiction as he previously wrote crime novels under another name. He was born in Leeds, where he studied psychology at Leeds University and where in a previous life worked in its sociology department. The Whisper Man was inspired by his own son, who remarked one day that he was playing with the boy in the floor. North currently lives in Leeds with his wife and son.

There were lots of twists and turns and plenty of explanations at a satisfying conclusion. If I had any any complaints I’d maybe think there was too much in way of coincidence, in the way everything fitted together so neatly. But that’s the joys of fiction . You can contrive a set of events to suit. I do love an aligning of the fates and a “fancy that” moment in real life so I shouldn’t question their appearance in a story, I guess. Tom seemed a little vague at times. Can you be married to someone and really know nothing of their upbringing? Then again, I’m not a quizzer of people myself. Sometimes you just accept people and don’t query.

This had a few genuinely creepy moments as well as a slow build of tension to frantic search for a killer. It should appeal to those crime readers and the fans of whispers and things that go bang in the dark.

So take my advice and get a copy from your local bookshop or download a copy. But before diving in to what has been described as the “Best Crime Novel of the Year”, remember to close the door fully, so you won’t be disturbed.

This book review is part of a blog tour organised by the publisher. To see what the other reviewers thought about visit their websites listed below. Then, if and when you get a copy and have read it, come back and tell us what you think. We’d love your feedback.