The opening lines of the song “America” by Neil Diamond  go, “we’ve been travelling far without a home, but not without a star… Free we huddle close, hang onto a dream…. Never looking back again, they’re coming to America..”.  America is a big boiling pot of many different nationalities, the Irish, Mexicans and Italians to list of some of the larger groups. Among the other assorted nationalities are the Japanese. The difference between the Japanese and the other immigrant groups is that their homelands never attacked America, a few Irish Fenian’s tried to invade the British ruled Canada from America in 1866, but that was a rather fool hardy attempt which was put down quickly. As for the Italians they may have fought against America during World War II, but they were never seen as a perceived threat. Whereas the Japanese who emigrated to America made lives and integrated, only for it to be taken away from them when Pearl Harbor was attacked and that’s where last months book group read takes us. The book is “The Budda In The Attic “ by Julie Otsuka.

The book tells the story of a group of non-English speaking Japanese women who arrive in America between the two world wars, primarily as Picture Brides an early form of Sex trafficking.

These women never knew their husbands; they just embarked on the arduous trip clutching a grainy black and white photo of their betrothed (hence the term) and the promises of love, 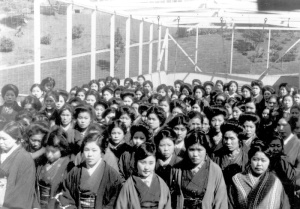 happiness and riches. Of course what met them when they arrived was just as promised for some and a violent, abused, put upon hell as well as back breaking slavery for others.  From there they had to start from scratch, initially learning the language and the customs. After a while they started businesses, raised families and lead new lives, but with world war two comes internment and then what…?

Good things come in small packages, and this can be especially said of this book, the whole book is small at only one hundred and twenty nine pages long, it’s a novella. I’ve read longer IKEA manuals, but none of those have been  as great as this little bundle of joy.

The characters are also small, owing to the fact that you never actually get to follow one character, all in all the book is a reportage of what happened to this group, but it is told beautifully and wittily. The only thing big about this book is the packet steamer they sailed on and the vast new world they found themselves in on arrival, not forgetting the big warm contented feeling this book leaves you with after the last page.

The staccato style of writing is very poetic and reads very easily, if at some points it feels repetitive, this is all part Otsuka’s excellent way of telling the story of many in a condensed but very informative way, mixing heart wrenching tales with just the right amount of humour to take the edge off it. Which allows the reader to get a very detailed picture of what different immigrants experienced during their voyage across the pacific, then on arrival and subsequently during their lives. Amidst the book group discussion it came to me that the style of writing reminded me of the Johnny cash song “The One On The Right Is On The Left” its the tale of a successful folk group which is destroyed by political instability. The chorus goes ”Well the one on the right was on the left and the one in the middle was on the right and the guy on the right was in the middle and the guy in the rear. Burned his driving licence…” The thing is in each chorus the guy in the rear does something different. Which is just how Otsuka’s story telling comes across. 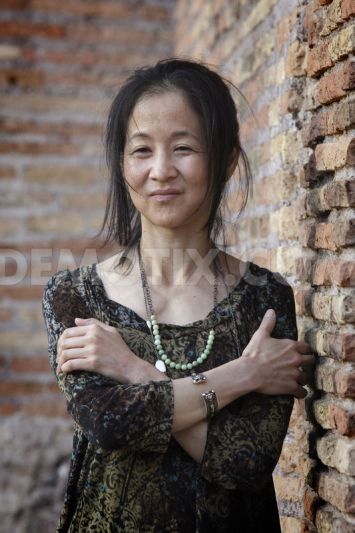 The Buddha in the Attic is Japanese American author Julie Otsuka’s (www.julieotsuka.com) second book published in 2011; nine years after her first book “When The Emperor Was Devine”. Where as Buddha in the Attic deals with the Picture brides arrival and subsequent lives up to internment, her first book deals with the actual internment. Both books have won numerous awards including the Asian and American Literary Award and the Langum Prize for American Historical Fiction. As well as that both books are prescribed reading for “Freshmen” in numerous colleges across America.

So if you’re looking for an excellently written book that traces the path of the Japanese in America from there early beginnings as mere sex slaves to hard working members of community and their eventually internment and the mistrust it cast over them, this is right up your street. I just don’t know what Alex Haley would have done if some had suggested that he condense “Roots” into one hundred and twenty nine pages.