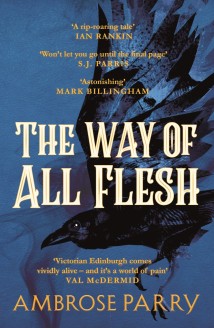 Its odd how things work out sometimes. My husband receives a steady selection of books to review for this literary blog and I browse the titles and the back-cover blurb, then if the book takes my fancy I volunteer my services as reader and reviewer. Simples…

With the fairly recent addition of blog tours, we have found some scheduling pressures, usually to do with fitting in our own personal reads along with book club commitments and therefore occasionally I am handed a book to review to be sure of meeting a deadline. Such was the case with this month’s first review for the Way Of All Flesh by Ambrose Parry published by Canon Gate (www.canongate.co.uk) on the 2nd May.

I didn’t read the accompanying press release but went straight into the story. A historical murder mystery, just my thing! As you might know from my previous reviews. The added twist here is that the history in this novel is that of surgery, midwifery and the use of anaesthetics. Anaesthesia is a special interest of mine, as I work as senior nurse in the anaesthesia department of University College Dublin’s Veterinary Teaching and Referral Hospital.

When I first started working as a Veterinary Nurse in the UK in the mid-eighties, the practice I trained and qualified in was undergoing transition from a mixed practice, covering the care of all species from domestic pets to farm animals to purely companion animal work. This was as a result of the retirement of the two senior partners, who were in their seventies at this stage. Being of a similar ilk to James Alfred Wright, who wrote the James Herriot novels, the practice was a treasure trove of antique equipment, chemist’s drawers, labelled with Latin names, apothecary jars and no end of ancient instruments which looked like they’d come from a torturer’s chamber. All sadly thrown away during refurbishments! When I watch salvage shows on TV I wince! Amongst these items, was a bottle of Ether and a Boyles bottle. I can remember being fascinated in how these worked and was duly impressed by our ‘modern’ anaesthetic machine and vaporiser.

The Way of All Flesh introduces us to Will Raven, a medical student who is starting an apprenticeship to the renowned Dr James Simpson. Will has his own secrets and problems, having endured poverty and hardship in a humble background he is trying hard to hide, even before finding the body of his friend, a prostitute, who has died under mysterious circumstances in her room. She had asked him for a loan shortly before her death and Will is now in serious debt to a moneylender. Not a happy predicament now, let alone in that era. His new employer’s parlour maid, Sarah, is initially suspicious of him .Sarah works in the doctors in house clinic and has an interest in medicine but she is frustrated in her ambition to use her capable brain by the  restrictions to both her sex and her station imposed in the Victorian period. When more bodies are found, Will and Sarah work together to find out who is responsible for the gruesome deaths, putting their positions and their lives in jeopardy.

The really interesting aspect of this book for me, was use the use of real case studies and historical figures. The descriptions of births and surgical procedures are sometimes stomach churning, such is the attention to medical detail, but fascinating. The story of the research into anaesthetic agents would seem at times absurd in its methodology, sniffing chemicals as after dinner entertainment to assess their efficacy and safety! Also the objections, both religious and ‘scientific’ to their use to ease patients distress, aid procedures and improve patient mortality statistics had echoes of the ‘anti-vaxxer’ propaganda seen both in Edward Jenners small pox vaccine introduction and in the Measles resurgence we are facing now.

Another important theme in this book, I felt was the subjugation of women and the lower classes. Sarah was a strong and sympathetic female lead here. There were to me, reminders of the film Mary Reilly, where we see the story of Jekyll and Hyde through the eyes of their maid, or to Albert Nobbs, where Glenn close has to disguise herself as a man to work as a butler at the Morrison Hotel in 19th century Dublin.

This novel combines the expertise of Scottish author, Chris Brookmyre, and his wife, consultant anaesthetist Marisa Haetzman under the pseudonym Ambrose Parry. Chris is a multi-award winning novelist, his previous books include Quite Ugly One Morning (1996), Black Widow (2016) and Want You Gone (2017). They are based around investigative journalist, Jack Parlabane and counter terrorism officer, Angelique de Xavia. His books have won plaudits for their comedy, social comment, politics and strong narrative and earned him the slightly dubious appellation of ‘Tartan Noir’. It was Marisa’s research for her Master’s Degree in the History of Medicine, which uncovered much of the material on which The Way Of All The Flesh is based.

The story has plenty of twists and turns and despite the detailed descriptive passages, keeps up a good pace to a breathless climax and reveal. The description of Victorian life in medical circles, fine houses and the gritty alleyways is well drawn. Will and Sarah are an interesting duo and I look forward to the follow up novel, The Art Of Dying, due to be released later this year. I’m dying to read it, you could say…

This book is part of a Random Things blog Tour, to see what the other reviewers thought visit their blogs listed below. Then if you get a copy and read it, please come back and tell us what you thought, we’d love to hear your feedback.