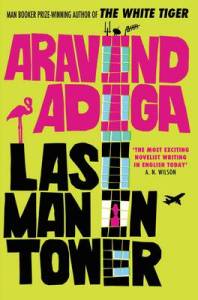 You’re probably not too familiar with the Sahitya Akademi or its numerous literary awards. It’s India’s national academy of letters, established in 1954, with the aim of promoting Indian literature and its twenty four languages, including English.  In the past couple of years original Indian literature and Indian based literature has been pushed onto the international stage with the adaptations of Vikas Swarups ‘Q&amp;A’ by Danny Boyle into ‘Slumdog Millionaire’ and Deborah Moggach’s, ‘These Foolish Things’ into ‘The Best Little Marigold Hotel’. In 2008, India’s literary industry was given a welcome boost internationally when Aravind Adiga’s debut novel, ‘The White Tiger’ won the Booker Prize.

Adiga’s third novel,’ Last Man in Tower’ was published in 2011. Set in the thriving metropolis of Mumbai (formerly Bombay) it follows the residents of an aging tower block who are caught up in the development boom taking place in the city, when they are offered a lottery winning sum to sell their apartments to a local developer. But there’s a catch. Every member of the block or society must agree or the deal will fall through. They’ve all lived together in the same building for years and their lives have become interlinked. But when a number of them refuse to sell, led by Yogesh A. Murthy, a retired school teacher and widower known as “Masterji”, friendships start to break down and friends and neighbours stoop to new levels of depravity to find out whose agreed and who’s holding out. In the end it’s the whole block against Masterji. Will he finally give in and sign or will it take a little bit more persuasion?

The story itself it’s not a new one. Walt Disney’s, “Herbie Rides Again” gave the same theme a rather funny run in the 1974 film with Ken Berry and Stephanie Powers. Although in Last Man in Tower, Adiga’s excellent narrative of the hustle and bustle of every day life in the over populated city is fantastic and you can actually feel yourself immersed in the hot sweaty routine of Indian life.

As for the main character Masterji, he initially comes across as a poor elderly gent being bullied out of the apartment he’s shared with his late wife and family for years. Then, as the story moves on you realise there’s no real reason for his not biting the developer Dahmen Shah’s hand off like his neighbours, except bloody-minded stubbornness. It’s easy to see Shah cast as the big greedy land grabbing baddie of the piece, but in the end he is a man of his word. If there’s an untrustworthy character it’s his “left hand man” Shanmugham.

characters in the story is heading for trouble. Ok, so you get to realise rather quickly the main characters are Masterji and his neighbours the Pintos but then another twenty characters move in and out of the story on a regular basis, requiring you to stop and think: who is he, she, they? It does become a bit annoying after a while.

The book is a bit of a tome, with its four hundred pages, into which nine books are crammed in much the same way as the residents of the building it’s written about.  I liked the overall story; it reads easily enough despite the linguistic gymnastics caused by the names and is well worth a read.