We read These Foolish Things with our bookclub a few years back and the following Christmas, we watched the movie. It was our Christmas tradition to watch the film version of one of the books we’d enjoyed that year. Other years we watched The Help, after reading the book by Kathryn Stockett and The Dead, following from the story of the same name by James Joyce. Usually, it was fun to see the characters brought to life and the plot twists occur as expected on the screen. This wasn’t the case with The Best Marigold Hotel, the film which is based on the book. In general, the storyline is vastly different, but the great characters developed by Deborah Moggach had been used. So I was delighted to get the opportunity to read her latest book for this months first review. Its The Black Dress published by Headline Review (www.headline.co.uk ) 22nd July

When Pru’s husband walks out on their seemingly rock solid marriage, she’s distraught. More over from the shock of the break up and the loss of the life they had, than him leaving. Still reeling from the bombshell, she goes off to a friends funeral, the hymns are the same, words of praise. But the eulogy is different, not the person she knew… She’s gone to the wrong funeral. Everyone is very welcoming, its quite hilarious actually. and more fun than she’s had in ages. So Pru buys a Little Black Dress in a charity shop and goes to another funeral and another. People don’t want to make scenes at a funeral, what harm can it, or will it…

Lots of things do happen in this book. Deborah Moggach really throws the kitchen sink at this drama in terms of plot twists and turns. Sometimes several things at once, so you can understand why Pru is overwhelmed with all the changes to her reality. There are lots of surprises and a good dash of dark humour. I’ve just read the Thursday Murder club, by Richard Osman. There, I loved the character of Joyce, with her constant eye out for lonely men and her wry wit. I thought Pru was going to be of similar ilk. However, Pru is a bit less resilient and bit more whiney. She reminded me of the Liz Jones column in the Saturday Independent, which I refer to as ‘Liz Jones Moans’ so I guess, personally, I found Pru a little harder to like. She may well sit better with other readers. This didn’t take too much way from my enjoyment of the writing. The story is funny and the scenarios farcical but believable. There is some pathos there too. The characters show their vulnerability and humanness.

This English author Deborah Moggach’s (www.deborahmoggach.com) twentieth book The others include, You Must Be Sisters (1978), A Quiet Drink (1980), Porky (198383), Driving In The Dark (1988), These Foolish Things (2004) on Which The Best Exotic Marigold Hotel ,was based, and The Carer (2019). She’s also written two collections of Short Stories – Smile and Other Stories (1987), Changing babies and Other Stories (1995). On top of that she’s written two screen plays Pride & Prejudice(2005) Starring Keira Knightley and Matthew MacFadyen, and Tulip Fever (2017). She she currently divides her time between Wales and London.

I’d recommend this book to fellow ladies of a certain age, who have a naughty twinkle in their eye, an open mind and a good sense of humour, but sadly I wasn’t cheering for Pru in the same way as I was for Evelyn in These Foolish Things.

This review is part of a random things blog tour, to see what the others thought the book visit their blogs listed below. Then if you get a copy, comeback and tell us what you thought. we’d really appreciate the feedback.

According to Shakespeare there are seven ages of man, you may not be aware of the whole poem of the same name, but you’ll know one of its oft quoted lines, “All the worlds a stage and all its men and women merely players..”, from “As You Like It“. According to the poem, the sixth stage is old age, “the sixth stage shifts into lean and slippered pantaloon. With spectacles on nose and pouch on side…. A world too wide for his shrunk shank; and his big manly voice turning again to towards childish treble…”  This stage is something we’ll all experience eventually. The sixth age is also the theme of last month’s book group selection. The book is known by two titles; originally it was “These Foolish Things” by Deborah Moggach. But after the release of the hugely successful film adaptation, all subsequent printed copies of the book were renamed, “The Best Exotic Marigold Hotel”.

The book tells the story of a group of pensioners who take up the opportunity to live out their remaining years away from the cold British weather, the high cost of living and the deterioration of society and the values of old. For the warmer and less economically challenged climbs of a new Indian retirement home. The book follows their new lives and their adjustment to the totally alien cultures and experiences. 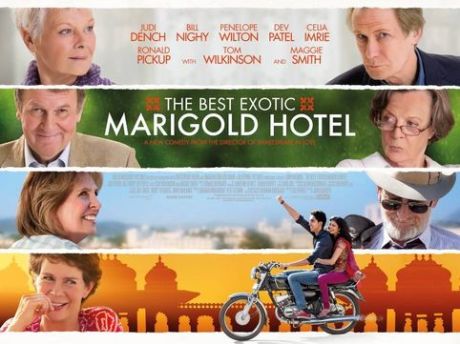 The film which features a cast of such British acting heavyweights as Dame Maggie Smith, Dame Judi Dench, Tom Wilkinson and Bill Nighy. Tells the story of a group of pensioners who travel to a brand spanking new retirement home in Jaipur, only to discover on arrival that it is far from the glamorous claims and pictures of the brochure and on the verge of closure. So they set about turning its fortunes around while finding romance and new lives in the diverse and developing cultures and economy of India.

As a rule I never read a book after I’ve seen the film adaptation first. I’ll go see a film adaptation after reading a book, just to see how the writer and director interpreted it; because a film is never as good as how your imagination pictures the story.  In this case the book was never going to be as good as the movie. It’s rather slow and the characters lives before they go to India are quite interesting, but once they arrive things just tick over and the stories really go nowhere. I and most of the other members of the book group had seen the film beforehand and where always trying to picture the characters from the film in the book, but alas we couldn’t. If you hadn’t seen the film before reading the book it would stand alone as an alternate story.

writer, who has written twenty books which include seventeen novels and 3 collections of short stories. She’s also an acclaimed scriptwriter who is responsible for the screenplay of the BBC Drama “Pride and Prejudice”, starring Colin Firth. She’s adapted four of her own books for TV, as well as the “The Diary of Anne Frank”, a Nancy Mitford novel and an Anne Fine novel. Surprisingly, whilst she did adapt a screenplay for “These Foolish Things” , it was Ol Parker’s version that was finally used and I can see why. Moggach has lead an interesting life which includes living in Pakistan, as well as campaigning for the change in the law regarding Assisted Suicide, following her mothers imprisonment for assisting a terminally ill friend take their life.

So my advice is, if your feeling your age and looking for something to pick yourself up, don’t reach for this book. But go out and rent the film, as they say laughter is the best medicine. This is certainly the tonic and may also convince you to add a trip to India to your “bucket list”. Where as this book should be consigned to your own personal room 101.