The first thing I can tell you about this month’s second book, is that quite a few of my readers are not going to like it from the get-go. But there will be a group of you who will be fascinated by this book, even excited. The book is Fuck Yeah Video Games by Daniel Hardcastle and published by Unbound (www.unbound.com) on the 19th September.

Another thing a few readers won’t like, is reading this book on your morning and evening commute as I found out. When I was met with a few raised eyebrows and tutting on the LUAS, Dublin’s light rail system (owing to the large yellow expletive on the cover). I even think a couple of mothers pulled their children closer and shielded their eyes.

The book charts the history of video games from the humble tennis game, where you moved a cursor up and down the screen trying to hit a bouncing white square past your opponent’s cursor to score a point,  to today’s modern games which are almost movie-esque in story-line and action, These allow you to play with or against not just a person or persons in the same room, but random strangers not even on the same continent, who more often than not may be half your age. These modern video games also feature so much detail, that the afore mentioned tennis game is now not too far removed from the hoop and stick our grandparents derived so much pleasure from as kids. The book also looks back at the success and failures of the large game designers and console producers (three of them to be exact) Sony , Nintendo and Atari… Who???(google it).

Gaming nowadays has progressed from something aimed initially at an age group spanning 8 – 18yrs, to today, where forty-somethings like myself are not ashamed to say they are gamers. No anoraks here, unlike train spotters and model train enthusiasts! Oh no, we stay warm and toasty in our bedrooms and “Mancave’s”.

Also, with the likes of the Nintendo WII console sports packs, gaming is now a family pastime and regularly seen as the ideal post-Christmas dinner entertainment. Where everyone from the youngest to the grandparents gets involved. Then of course you only have to see the news recently, where a teenager in America took home $3million for winning the Fortnite (it’s a popular video game) World Cup in front of a packed out sports stadium and even bigger online audience; and you wonder why some people such as Hardcastle can make a living out playing games all day long.

Yes, my name’s Adrian and I’m a gamer, but I’m not nerdy about. I don’t go out and buy a game and play it constantly, unless the wife’ away or out for the evening. This due in part to having responsibilities, I only really returned to gaming a few years ago when I requested a PS4 as a present for my fortieth, after a hiatus from when I played them in my youth.

FYVG is all in all an entertaining and light-hearted read. But it’s really a reference book, namely because it has footnotes, which I find distracting in anything that is not a self-help book, textbook or encyclopedia. It’s not a book you are going read from cover to cover.  It’s more like a swimming pool at a holiday resort, there for you to dip in and out of it on a regular basis, while leaving it on your coffee table or bookshelf as a conversation starter.

My initial reaction when getting it was that its very big. But I soon realised that of the 379 pages only 296 were actually part of the book, the rest were a list of 101 of the best games ever published, a glossary of terms used in the book, author bio and crowd funding acknowledgements, of which there are quite a few.

As for the games featured in the book, I’ve only played two. As for the 101 best games ever published listed at the back, its seven. Does that really make me a gamer? I was personally disappointed there where weren’t references to my current favourites “No Mans Sky”, which has had its own problematic road to success. Then there’s Tom Clancy’s Division 1 and 2, the numerous Call Of Duty games and for a real history lesson, games played on the Comodore 64, ZX Spectrum and my own Dragon 32(yep, Google it). Admittedly those three weren’t games consoles, but before consoles arrived on the scene video games were played on computers and publishers still release  PC editions of popular titles these days.

This is English author Daniel Hardcastle’s (@danNerdCubed) first book, despite what the inside cover might say. He’s is a gamer and regular broadcaster on Twitch – an online channel solely dedicated to allowing you to watch people like Daniel play video games… I’ve never watched any of these, as I’d rather be playing the game myself. The lavish illustrations in the book are provided by Daniel’s wife Rebecca and these include caricatures of the leading crowd funders who helped get this book published.

Overall, I got the feeling that Hardcastle was trying to emulate columnist, author and TV presenter Jeremy Clarkson in his writing style and general ladishness, even referencing him several times throughout the book. But as much a I liked this book, I thought he tried too hard and, in the end If I discovered “Jezza” had ghost-written this book, I wouldn’t be surprised.

I did like FYVG, as I have an interest in the topic. But again, it is a book with a niche readership, despite the number of people worldwide who play video games. You’ll also find quite a few of the younger generation aren’t big readers. But again, as it’s quite easy to read in bite sized chunks, this maybe a popular read for them and also a way to reignite interest in the older games discussed in the book, that you’ll find in the second hand section of gaming stores and car boot sales.

This review is part of a Random Things Blog Tour. To see what the other reviewers thought of the book, visit their sites listed below, then if you get a copy comeback and tell us what you thought, we’d love the feedback. 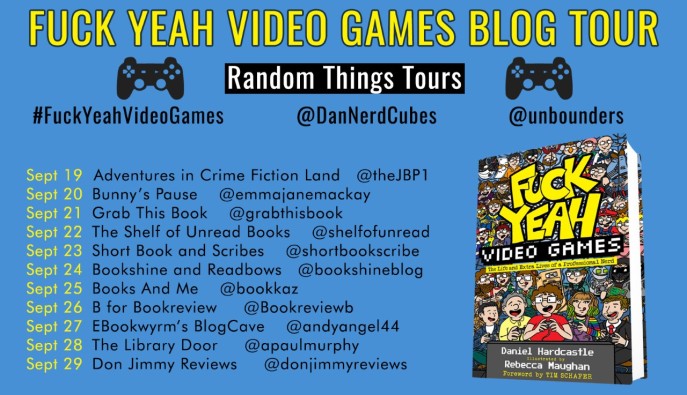