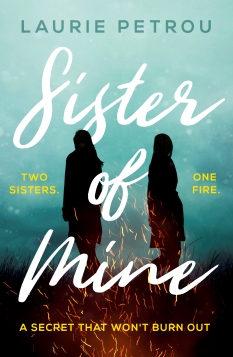 I’m an only child, and the offspring of two other only children so the opportunity to observe at first hand the joys and tribulations of sibling relationships has been pretty non-existent.  My grandparents had many siblings however; and I recognised that in their families there was an emotional intensity to the reactions between siblings, both in terms of unconditional love and in some cases, long held feelings of jealousy and dislike. I always wondered what it would be like to have a brother or sister myself and enjoyed books such as Little Women and TV dramas such as the Walton’s so I was intrigued to read this month’s second offering and todays blog tour entry, Sister of Mine by Laurie Petrou, published by No Exit Press (www.noexitpress.co.uk) on the 20th June.

Hattie and Penny Grayson are sisters who have grown up in a small town. Everyone knows their troubled histories, but no one can know of the secret that binds them together. There is a fire, and someone dies, albeit a cruel and overbearing husband. Who is responsible and why? This shapes their future relationships with those they meet and each other.

This debut thriller was a very enjoyable read. Engrossing and thought provoking; I did, as the cover suggested, burn through it. There is a steady build-up of tension and a feeling of impending crisis throughout. The characters are very well described, and you feel you have great insight into their personalities and motivations because of this and the insights the slow drip of background history gives.

There was , I felt,  an interesting twist in perspective towards the end of the book , which I don’t want to spoil for other readers but I will say it changed my view of the main characters entirely and kept me mulling over the story and the effect a character being the narrator has on your perception of what is the ‘truth’. History is written by the victors as they say.

Despite sibling rivalry being a theme which has long been in our consciousness, with Cain and Abel , Romulus and Remus and Whatever Happened to Baby Jane to name a few disastrous relationships , this book to me felt fresh and not cliched. There were two strong female characters in lead roles, with the men playing minor, villainous or subservient parts.

There is a matriarchal  onus to the book with the memory of a deceased mother constantly shaping the sister’s behaviour. There were some moments of dark humour too.

This Canadian author Laurie Petrou’s (www.lauriepetrou.wordpress.com)  first book, her day job is an associate professor at Ryerson University in Toronto, at its Media School. She’s also the director of the Masters of Media Production program at the school too. In 2016 she won the Inaugural Half the World Global Literati Award, which honours unpublished works by female authors, featuring female protagonists, for Sister Of Mine. She Lives in a small town in Ontario’s wine country with her winemaker husband and their two sons.

Overall, I was surprised this was Petrou’s literary debut as it felt so assured. Also given its size coming in at two hundred and fifty pages, it won’t take up too much room in your luggage. I myself am looking forward to seeing what she produces next. Will it  top this Sister Act?

This review is apart of a Random Things Blog Tour, to see what the other reviewers thought, visit their blogs listed below. Then if you pick up a copy and read it, comeback and tell us what you thought, we’d all love to hear your feedback.