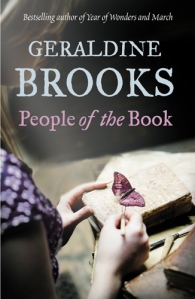 Do you know what a Haggadah is? Neither did I till Christmas. It’s a Jewish Passover prayer book, usually owned by individual families. Even a friend of mine whose mum is Jewish, but is a lapsed practitioner  and whose extended family are of the Jewish faith, admitted he had to Google it when I asked him recently by way of research for this article.

All across the globe and down through history there have been historic literary works which contain ornate and intricate paintings and stylized text and other various illuminated manuscripts. In Ireland we have the Book of Kells, England has the Magna Carta. The majority of the world’s religions have had numerous illuminated manuscripts such as the Book of Hours for devout Catholics, the Hebrew Seder Keri’ath Shema Al ha-Mitha (prays before retiring at night), the Jewish Torah and the Koran of Islam. Many of these magnificent works have also been lost as a result war and religious persecution. This month’s book group choice was a novel about 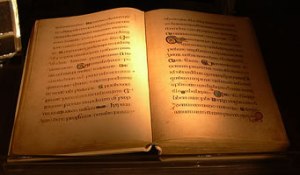 one such book and was selected by our founder Kathleen (who bears an uncanny resemblance to author Sophie Hannah -see previous review). Her choice was the Geraldine Brooks novel The People Of The Book.

The People Of The Book tells the story Dr Hana Heath an Australian book conservator who is summoned by the UN to Sarajevo in the spring of 1996 to trace the history of an ancient Jewish Haggadah found in the basement of the battle scarred national museum. It’s only a matter of months after the ending of the civil war and the city is still quiet tense while also trying to return to some semblance of normality, without the fear of death by sniper. On opening the book Hana finds among its pages things like a butterfly wing, sea salt, wine and blood stains and a white hair. What seem like totally random and ordinary everyday things you might find in an old manuscript, are to Hana’s trained eye, huge clues as to how the book found its way to Sarajevo and also where it came from originally. In the resulting narratives we are transported back in time to Sarajevo in the midst of the second World War,  to a very promiscuous Vienna in the 1800’s, to  16th century Venice during the inquisitions and  to Spain in the late fourteen hundreds.

As she nears the end of her voyage of discovery, which, in real time takes her back and fourth across the Atlantic and Europe while also answering questions about her own past, as well as explaining  the reason for the dysfunctional nature of her relationship with her mum. Hana discovers a sinister plot to destroy this book, which almost costs her, her career. Will she finally discover the truth about this mysterious book and stop it falling into the wrong hands.

Ten years ago very few people knew what a symbologist was or did; now, thanks to Dan Brown, Tom Hanks, four blockbusting books and two hugely successful films, more and more students are considering symbology as a career (actually its Typography or religious Iconology).  The same may now be said for book conservation following this book. From the first page the book feels like an imitation of a Dan Brown novel. But Brooks doesn’t imitate, she and Dr. Hana Heath go out and say “Oih! Robert Langdon, move over there’s a new girl in town”. It’s currently a one off piece and hopefully this won’t be, as Hana is a great character. She’s likable and different; her attitude to sex and relationships is easy going to say the least, not what you might expect from someone in her line of work (although neither is Robert Langdon and his Mickey Mouse watch). She seems to have an ex in every country and the back story involving the all but non-existent  relationship with her mum is solid and makes her character believable.

The book is engrossing and informative from the get go, if you aren’t too familiar with Jewish history, this is a fantastic way to get acquainted with it and ancient Europe. Even when it jumps back in time to tell the individual stories behind the clues Hana finds in the Haggadah, each short story grabs you and drags you into its own little world. Whether you’re reading about a Venetian Rabbi feeding his gambling habit with a charitable donation he got to help the poor in the ghetto  or a young Jewish girl trying to outrun the inquisition in Spain. Before returning the reader back to Hana and the modern day story, which equally holds you. 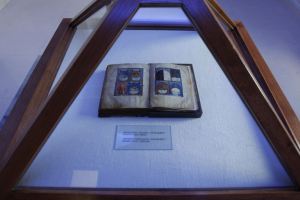 The novel was inspired by the events surrounding the real Sarajevo Haggadah which was thought to have been lost during the civil war but was discovered following a break in at the national museum near the end of the war. It was restored using UN funding and now is on permanent display in Sarajevo.

Published in 2008, this isn’t the Australian born, former war correspondent’s first book of fiction, but her third of four. Her other books include, Year of Wonders (2001), March (2005) for which she won the Pulitzer Prize for fiction in 2006 and finally Caleb’s Crossing (2011). She’s also written two non-fiction books, Nine Parts Desire(1995) and Foreign Correspondence(1997). 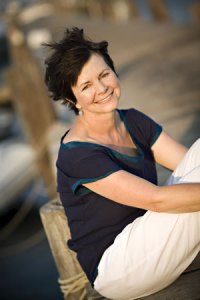 book into a movie because it would do equally as well as Angels and Demons or The Da Vinci Code. I could easily see Toni Collette as Hana.  So take my advice, if you liked Robert Langdon’s escapades you’ll enjoy this and even if you didn’t you’ll still  love this original take on the work of a book conservationist. So get down to your local bookshop and snap up a copy of The People Of The Book.