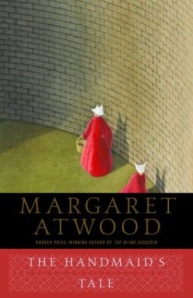 Having read and reviewed, last years much hyped and talked about Fifty Shades of Grey. I’m not the least bit shocked by any type of gratuitous sex in modern literature. That’s not to say that memorable sex acts won’t stay with me after I’ve read a book. This is the case in this month’s book, Margaret Atwood’s, The Handmaid’s Tale. The act in question isn’t even anything out of the ordinary, or gratuitous, more comical and that’s why it stayed with me because, it’s the only real thing that’s sticks out in a rather bland and dated book.

The Handmaid’s Tale was published in 1986 and is what some would call a dystopian novel. Set in North America after a great war sometime in the future. A young woman called Offred is a handmaid in the new Republic of Gilead and the handmaid’s role is to breed and move from one Commander to the next after they have conceived a child for him and their aging wives. Failure to do so, for whatever reason, will result in a slow but certain death by hanging at the city wall. The government and President in Washington have been ruthlessly killed and over thrown. The country is now being run by right-wing Christians, who hark back to more traditional values.  They are a bit like the Amish (except in Atwood’s society they drive cars and use electricity). Despite all the repressive laws put in place in by the authorities, even subjecting the handmaids to wear different coloured smocks to highlight their place in society and forcing them to take singular names all beginning with “Off”, Offred still finds time for her memories of the life she used to live with her husband and daughter. She also enters unintentionally into two dangerous liaisons, with her commander and his driver. These, if detected, will lead to her death or transportation to the radiation devastated colonies.

stages of development. For example, every piece of technology is called “compu” this or “compu” that. Apple, Microsoft or Atari were all alive and kicking in 1986 and so I find it hard to believe that following an apocalyptic event like a nuclear war, we’d lose all imagination with regards to naming technology – yes, supposedly this society has regressed. But even today, when some of the more moderate Amish communities use ATM’s and other technologies they don’t re-brand them. Then there’s the idea that as a result of the war, there’d be a shortage of young women and also the effect of radiation on men, we would  require a state sponsored surrogacy regime, when back in 1986 IVF was an available form of conception for couples who were unable to have children naturally.

The sex act I referred to at the start is in all senses a threesome of sorts, the hand maids are impregnated in what can only be described as a convoluted and uncomfortable act whereby the commanders wife lies on her back, legs akimbo. The handmaid lies back between them and the commander goes about things as normal. The image this conjures up raises a smile midway through the book. But again you have to wonder how backward a fundamentalist state would go to decree that this sort of shenanigans should be the norm. Although if recent figures from the World Health Organisation for Female Genital Mutilation is anything to go by Atwood isn’t far off the mark on this point.

In another aspect of the book, I get a hint of where Atwood may have got the inspiration for the uniforms the Handmaids wear that differentiate them from the other types of women in society, such as the Martha’s who act as servants in the different Commanders households. The Martha’s colour is dull green, while the handmaids wear a heavy red smock with white head piece that has large wings  to restrict their view of the world. While reading the book I saw a picture on a calendar in my mother’s house of a couple of Redemptorist nuns at last years International Eucharistic Congress in Dublin. The Redemptorist nuns wear a red habit with white borders and whilst some have blue too, predominately the colour is red. This image helped me visualise the characters in the book more clearly.

There are some parts of the book that give rise to the theory that Suzanne Collins may have used it for inspiration for The Hunger Games. Things, such as the Storm Trooper like guardians who enforce the laws and large gatherings like the Salvaging where new handmaids are selected and punishment is meted out.

Back in 1990 the book was adapted into a movie with a stellar cast that includes the late Natasha Richardson, Faye Dunaway, Robert Duvall and Aidan Quinn. So instead of wasting your time reading a rather tame and dated book about convoluted female emancipation and reproductive procedures in the future, spend 90 minutes watching it.