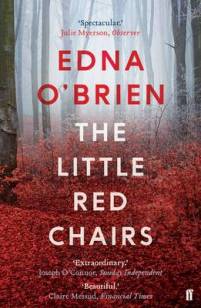 During my wedding weekend in Lincoln in June, Lincoln castle had some very important guests. they were a segment of the 888,246 ceramic red poppies that were installed in the Tower of London in 2014. The poppies represented the British men and women who were killed fighting in both world wars. This isn’t the first time inanimate objects have been used to represent those slain in battle, on the 6th April 2012 an art installation was unveiled on Sarajevo’s main street, it consisted of 11,541 red chairs which represented the victims of the siege of Sarajevo which lasted from the 1992-1995. In the midst of this audience of empty red chairs were 643 little red chairs representing the children killed during the siege, and that is the inspiration for the title of this month’s book, it’s The Little Red Chairs by Edna O’Brien.

The story centres around the arrival of a mysterious foreigner to a west of Ireland village, he claims to be a faith healer and soon sets up a practice, where he uses his charismatic personality to bring the villagers under his spell. One woman in particular, Fidelma Mccarthy, falls heavily for his charm. When the strangers past – he’s responsible for war crimes in the Balkans – catches up with him, the untimely ending of the relationship in the glare of the media and the close-knit community has long and harrowing repercussions for her. So to try and distance herself from the fallout she goes away to what she thinks is a new life in the UK.

When I said harrowing , I really mean down right in your face gratuitously violent, one scene especially. If O’Brien is going for ‘Shock and Awe’, she hits you straight between the eyes. After that, the rest of the book is rather tame and very weakly stitched together.

At the recent book group meeting at which this book was being discussed, this was the main topics of discussion. There was divided views whether it was really necessary. Some of the members found it quite difficult to carry on reading after that scene , taken along with the inept actions of the main character leading up to this event, they found it a poor piece of writing by one of Ireland’s leading literary figures .

The book is basically two stories, the first part which is the story of the stranger from the Balkans arriving in the village, the relationship and its climax.Then the part of the story set in England reads more like a series of short stories about the lives of refugees in the so called land of the “Bright Lights” and “Streets Made of Gold”.  It was generally agreed that O’Brien had seemed to run out of steam after the ending of the relationship and instead of just writing some sort of short story or Novella, she either decided or was advised by her editors to hang a couple of short stories off the end to give it some sort of substance, which I feel it doesn’t.

Born in Co. Clare Ireland in 1930, Edna’s mother was a strict Irish mammy and O’Brien has often described her Irish upbringing as “fervid” and “enclosed”. She trained as a pharmacist and after marrying the Irish writer Ernest Gebler, against her parents’ wishes,they emigrated to London, where she still lives. There, she started writing full time. Her first book of 17 novels, The Country Girls was published in 1960, others included August is a Wicked Month (1965), Zee & Co (1971) and finally The Little Red Chairs in (2015) published by Faber & Faber. She’s also written nine collections of short stories as well as Plays, TV scripts and works of non-fiction.

O’Brien is among a select and elite group Irish literary luminaries who have had their books previously banned in Ireland, but as history has often shown, banning something doesn’t make it less popular but on the contrary more desirable. The majority of her books  express her despair over the condition of women in contemporary society in particular, they criticize women’s repressive rural upbringing. Her heroines search unsuccessfully for fulfillment in relationships with men, often engaging in doomed love trysts as a escape from their loneliness and emotional isolation, something which is seen clearly in The Little Red Chairs.

Near the end of the book Fidelma visits her ex-lover, now a convicted war criminal – whose inspiration is clearly Radovan Karadzic . The scene is so out of place and really does nothing for the story that again begs the question as to why it’s there? If its to take the rough edge off the story and conclude it somehow, it doesn’t reach any real conclusion just adding  a few extra pages to justify the print costs maybe?

The Red Chairs of Sarajevo

The characters in the village are stage Irish and are in keeping with a style of character that often populates O’Brien’s books. They are always 20 years out of date, if it was an attempt to see how the remnants of modern warfare might fit it modern Ireland, firstly you have to write about modern Ireland and stop harking back to “The Quiet man”. As for the London stories, they are not really believable and have been written better by other Irish writers.

My advice is, read it if you are a fan of dark tales about repressed Irish women stuck in another era, otherwise a more enjoyable book set in the aftermath of the Balkan war is People of The Book by Geraldine Brooks, previously reviewed on this site.