According to the lyrics to the 1981 John Denver song “Some Days Are Diamonds”, some days are diamonds, some days are stones, some days the hard times won’t leave me alone. But after reading this month’s book, whenever you think you’re having crap day, you’ll realize that your days are ten times better than those of this month’s author. Also, you’ll learn to find good things in even the darkest situations.

Statistics from the Royal College of Nursing Website (www.rcn.org.uk), claim that Motor Neurone disease(MND) affects any adult at any age, but it is most prevelant between the ages of 50-70. The illness affects 5,000 adults in the UK at any one time. On average six people a day die from MND in the UK. There are around 2200 sufferers in Ireland. According to the Irish MND Association (www.imnda.ie), there are approximately 350 people in Ireland living with it at any one time. In 2008, Irish filmmaker Simon Fitzmaurice, became one of them when he was diagnosed. This month’s second book is “I Found My Tribe by”  by his wife, Ruth Fitzmaurice and was published by Chatto & Windus (www.penguinrandomhouse.co.uk)  in 2017.

The book charts Ruth’s struggles in coming to terms with her film maker husband’s life changing illness. At the time of his diagnosis Simon was given just three years to live, two years later in 2010 he went in respiratory failure and was accidentally put on a respirator during an emergency procedure. Despite vehement medical advice Simon chose to remain on the respirator, thus altering not just his life but  the dynamics of his family’s lives . Through the books one hundred and ninety-seven pages, we follow their various moves around the country and across continents as they try to find any sort of treatment to help Simon regain a normal existence, from homeopathic medicine in the rural English countryside and to Australia, to experience the utter joys of living a care-free existence, if someone with MND can have a one. As well the everyday reality of ongoing hourly invasions of the family’s personal space by the army of ever changing live-in nursing staff who are on call 24-7 to help manage Simon’s needs.

At the centre is Ruth the stoic and embattled wife and mother, who must try to steady the ship and raise her ever growing family amidst this chaos. But even super heroes need a rock or at least a release from the daily struggle of soaking up everyone else’s woes. Finally Ruth finds solace and support in her “Tribe” the “Tragic Wives Swimming Club”, a group of women who have all experienced life changing events or personal tragedy and are drawn together to provide moral support while banishing their troubles by diving into the cold waters of the Irish sea and swimming off the beaches of Greystones in Co. Wicklow, on the East coast of Ireland. Following the advice of one of Simon’s carers, Ruth and the girls plan to re-energise their spirits by swimming naked in the reflection of a full moon. Can they finally bring themselves to do it? Especially when they discover that on the same night not a couple of hundred yards away, there is an open air cinema of on the beach, showing…. Yes, you guessed it, “Jaws”!!!

This book is primarily set three and a half miles from where I currently sit writing this review. So, I know Greystones very well, myself and my wife walk the dog around a large circular loop of the town on average, maybe twice a month. About three to four times a year we walk the 12km there and back along the cliff walk that link the towns of Bray and Greystones. I’ve also played badminton and socialised in there regularly, so I may have met or even seen Ruth and her “Tribe” taking a brave dip in the bracing waters around the beaches and coves in the town. I did find a connection with one of her stories, where she replays an encounter with a lone bagpiper serenading the women’s entry into the water. I had to laugh to myself as I and my wife have seen the same bagpiper practising on a secluded cove just outside the town. This was another part of the book that I loved, the challenge of trying to workout whereabouts exactly in the town the ladies were swimming. When she talked about the bagpiper, her previous descriptions of the cove all fell into place and I knew the location. 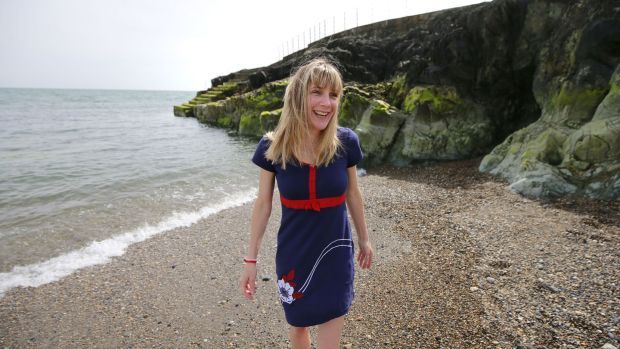 Ruth comes across as a real earth mother, if I did meet her or had we ever passed each other in the street, she’d probably been dressed in tie – dye and natural fibres. Anyone who names their kids Arden, Raife and Hunter, are aiming for the hipster vibe. Let me clarify I have nothing against earth motherly types, my best friend is one. So myself and Ruth would probably hit it off quite well.

This book, was the surprise hit of last year and once you start reading it you will see why. It is emotionally charged and will leave the reader drained as well as elated, with Ruth’s insightful portrayal of her life with Simon and the family as they endure the ups and downs. Rarely does a book lay bare as completely as it this does, the struggles a person goes through to deal with things as fully as “I Found My Tribe”, regular descriptions of Ruth sitting in her car in a lonely car park, balling her eyes out into a box of tissues or sitting in the garden talking to a tree, hit me right at the core, because we’ve all been in that space at one time or another.

“Tribe”, but from Simon’s family. His mother’s attempt to lift her son’s spirits with regular gifts of fancy bright shirts, as well their unwavering search for a cure are a tonic. I was moved at times by its sheer emotionally charged storytelling, although regular readers of mine will know, that’s not very hard.

This is Irish author Ruth Fitzmaurice’s (@ruthoneilfitz) first book, although she has in the past worked as a radio researcher and producer, before meeting filmmaker and writer Simon. The spark that led to “I Found My Tribe” was an article Ruth wrote for the Irish Times in 2016 in which she wrote about her new-found passion for sea swimming. She lives in Greystones with family, as well as her “Tribe”. Tragically Simon lost his struggle against Motor Neurone Disease in October last year, four months after the book was published.

So, if you and your tribe are heading away for the summer holidays, then head down to your local book shop, snag a copy at the airport or download it. Whatever you forget to pack, let it not be this book.