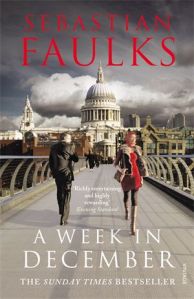 If you’re familiar with Ralph McTell then you’ll know in 1969 he took us by the hand and led us through the streets of London. After that, others such as Cliff Richard, Sinead O’Connor and Roger Whittaker, have also led us through the fabled streets of the English capital, while covering the song.

In 2006 Maeve Binchy took us under London’s fog bound streets in Victoria Line, Central Line. Re-titled London Transports for our unimaginative yankee cousins, who couldn’t get their heads around the simple title of a book set on the London train network. Americans obviously don’t read the blurb on the back of books! Then in 2010, the best selling author Sebastian Faulks, decided we needed to spend ‘A Week in December’ on the London underground.

This is the novel my book group was presented with for March, as the self explanatory title states this book has us spending the third week in December following the lives of seven characters (ahem), whose lives are all connected by the central line on the London underground.  There’s John Veals, a hedge fund manager trying to make a quick killing on the markets, while

destroying the world economy in the process; Tadeusz “Spike” Borowski, an eastern european professional footballer finding his feet in the premiership; Gabriel Northwood, a young barrister trying to get over the memories of an old flame; Hassan Al Rashid, a student being radicalised by an Islamist faction; Roger Tranter, a book reviewer hoping to win a major literary prize. Also John Veal’s son Finbar, a drug and reality TV addicted school boy and finally the character that links them together, Jenni Fortune, a train driver on the central line getting over a suicide involving her train and who worries about her out of work brother.

Faulks may have been trying to copy the success of Binchy’s book. What he ended up doing was producing a rather messy attempt. How?  Well, Binchy’s book, like her previous compilation of short stories, ‘The Lilac Bus’, set on a rural bus route in Ireland, had each of the characters stories nicely rounded into a chapter each or as in the case of ‘Central Line, Victoria Line’, set around a particular stop on the tube line. Faulks has his stories clumsily chopped and intermingled all over the place  as the days progress so that just as you get into one story it jumps to another and you have to remember what’s happening.

The blurb on the back, said the book follows seven characters. Well each of these actually have four or five others who interact regularly and distract from the story and get large chunks of  chapters dedicated to them, a couple prime examples are Sophie Topping and her husband Lance, a recently elected local MP and rising political star. Their sole aim seems to be hosting a dinner party at the end of the week at which four of the characters will attend along with a gaggle of others, who just seem to exist as page fillers.

Then there’s the uneven allocation of space, with lots of space given over to certain characters and not enough to others. Veal’s story for example, takes up almost half the book and if Faulks had put his mind to it, he could have got a full novel out of this character. While Borowski the soccer play gets at most ten pages of story all the way through the book, his story, like that of Veal’s son Finbar, rather limps through the book with no real conclusion. The same goes for that of Hassan, the English born Muslim kid being radicalised. Here again, is another ideal opportunity to write a rather enthralling and taut full length thriller. But as the narrative leads  up to the bombing of a fictional London hospital, (Which is being targeted  for no apparent reason, other than it is full of white people), where a number of the other characters have  found themselves in the course of every day life, it whimpers out to nothing when Hassan gets second thoughts.

The nicest story of the whole book is that of the blossoming love affair between Jenni Fortune and Gabriel Northwood. Gabriel is representing Transport For London, the company who run the underground. In a case brought by the suicide victim’s family. we are led nicely through their relationship over the course of the seven days which, in anyone’s book is a whirlwind romance to say the least, then just as you get that funny warm feeling for the two characters and happy that they are finding true love… the book ends, leaving the reader hanging. What happens next? Do they live happily ever after? This again is a theme through the book, with most of the stories, they stop dead; with no epilogue as to what happens after midnight on the Saturday when the dinner party ends… We never know whether Veal’s deal goes through…

This is what keeps the reader turning the pages, the expectancy of what might happen. One classic technique used by Faulks is that of a mysterious cyclist dressed in black with no lights on their bike who speeds along the pavement forcing each of the characters to jump out of his or her way. But again, this individual appears to have no role in the book except to nearly run down all the characters. 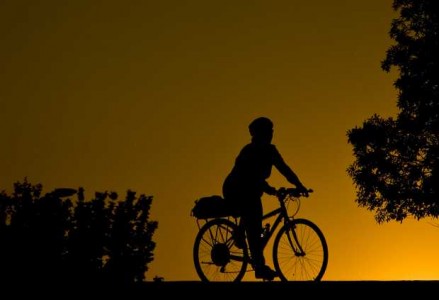 These characters are here to be lampooned and it came out at the discussion in the book group that the sole aim of this book was for Faulks to “have a go” at these types of people. He seemingly hates wealthy financial types who play risky games with our money to line their own nests; book critics (Oh well, I’ll be in the next book, represented as an online faceless blogger!) and  cyclists who speed around pavements with no lights on.

So all in all, you’re getting the picture that I was not impressed by A Week in December. This isn’t the first time I’ve read a Sebastian Faulks book. I read his 2008 James bond novel Devil May Care, commissioned by the Ian Fleming Foundation to commemorate the writer’s 100th birthday.  I was rather disappointed, after reading Fleming’s books and the follow-on series by John Gardner. Faulks’ attempt was a lack lustre affair with no memorable storyline and very little in the way of gadgets or excitement, which Fleming and Gardner had delivered on and which the film going public had grown up with over on the past 25 years.

So I’m not surprised by how this Faulks book turned out. Take my advice-‘mind the gaps’ in the story-telling and miss this stop to avoid the over crowded platform or if you haven’t done so already, change here for Binchy’s Victoria Line, Central Line.