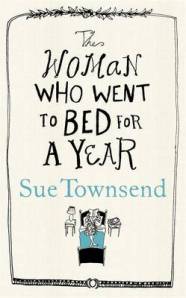 We all like our beds and relish the chance of a good old lie-on, usually at the weekends but if it occurs on a weekday you sometimes feel like you’ve won the lottery. Well I do anyway, especially as I’m a night owl who can survive on six hours sleep. So the thought of going to bed for an extended period might make some of us wet ourselves with anticipation. This is the premise for Sue Townsend’s latest book, The Woman Who Went To Bed For A Year.

It’s thirty years since The Leicester born playwright and novelist’s first book The Secret Diary Of Adrian Mole Aged 13 ¾  hit the shelves, I can remember reading her Adrian Mole column in my mother’s  Woman’s Realm magazine before it got published. I empathized with him because we were both christened Adrian, were around the same age and had a passion for writing. Since then there have been a further seven Adrian Mole instalments and a TV adaptation as well as five other novels including The Queen and I and Number Ten.

The Woman Who Went To Bed For a Year, charts the year in the life of Eva Beaver a housewife and mother. She’s married to Dr. Brian Beaver an Astronomer and they have two highly intelligent twins Brian Jnr. and Brianne. The day they both go off to university she decides to take to her bed, to supposedly find herself after years of looking after the kids and Brian. Along the way she enlists the help of her dreadlocked handyman Alexander to help her drastically de-clutter her life, wardrobe and bedroom. While on her journey of self discovery she picks up a menagerie of followers as word of her plight spreads around the globe.

I was disappointed by the book It is a funny read for three quarters of way but at the end it felt flat and came across as having lost its way. This is easy to see as its four hundred and thirty pages long. There are too many characters in the book to keep track of and it appears as if the editor missed cutting out a few of them, especially a Chinese classmate of the twins who has no real purpose in the story and has a whole chapter on his parents receiving a letter from him. This might have brought the page count under four hundred.

Most of Townsend’s previous books seem to feature dysfunctional families and relationships and the main dwellings always feel like a halfway house for society’s lame ducks and make you want to hum a Madness hit. The same applies here, early on in the book Eva discovers her husband has been having an eight year affair with a colleague, in the shed it the back garden. She then forms a relationship with Alexander the handy man, which stumbles through the book.

The main characters are well written and the basic idea of the story is interesting, but I think that because it deals with the subject of 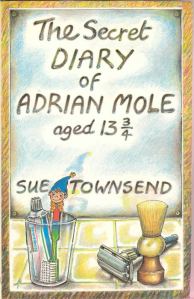 mental health and how society views it. This subject and humour do not make the best bed fellows, unless dealt with by a sound comedic writer like Townsend, here she fails. As for the conclusion, we never really discover if Eva found herself and what happened after she got out of bed. The book just seems to come to a dead stop, leaving a load of loose ends.  So if you feel like getting out of bed for a book or staying in bed with one, this isn’t it.