Every town or village needs a humble book shop, a small one off, non chain affiliated outlet where one can browse like you’re in a library and not feel like you’re in a  railway station or airport terminal. Even in the large cities, everyone should seek out a place like this where they can buy a book and also chat to the staff about things they’ve read or where the staff member can recommend books without feeling they’re holding up a queue of irate shoppers. Yes, some of the larger stores are trying to recreate this charm by opening up in-store coffee shops but this just tends to end up being frequented by giggly students on mobiles, latte ladies and business types on laptops which takes away from the quiet, almost monastic feel, of a quaint haven of literature.

When I moved to Bray 36 years ago it had one bookshop in it called The Bray Bookshop, to this day I can remember its racing green front and the large windows on either side of the main door. Inside it was pokey, but still you felt the moment you entered it was a world away from that outside. The counter was up by the door and you were always greeted by the person behind as you entered or left, usually old Mrs Clear or one of her family, even if you didn’t buy anything.  Since then the business has been developed by her daughter and son-in-law, moved to a larger premises on the main street and also grown into Ireland’s largest independent chain of bookstores with 9 stores across the country and a name change to reflect the nationwide coverage, now known as Dubray Books (www.dubraybooks.ie). But the charm hasn’t left the larger premises on Bray main street, it maybe brighter and carry more stock and also do a selection of cards too, but the staff still talk to you like you’re in a two person bookgroup and even on Christmas week one feels like you’ve entered a  monastery bar the constant swish of the double doors at the front. This month’s book is centred around a book shop similar in style and ambience to the original Bray Bookshop, its The Collected Works of A.J. Fikry by Gabrielle Zevin. 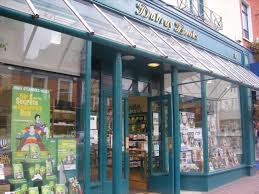 The story centres around the main character A.J Fikry the owner of a book shop on Alice Island, a fictional island off the coast of Massachusetts, loosely based on Nantucket. Life for ‘The Island Book’s owner is in a downward spiral after the death of his wife. Things go from bad to worse when he has a run in with Amelia a single and quirky book rep and then after consuming a bottle of wine one night he is helped into bed by the ghost of his dead wife only to wake up next morning and find the house cleaned and his prized possession a first edition of Tamerlane by Edgar Allan Poe has been stolen. Then a couple of nights later, as he is shutting up shop, he discovers a baby girl called Maya has been left in the book store with a

note attached asking him to take care of her. He enlists the help of his sister-in-law, Ismay and her wayward author husband Daniel, as well as the islands police Chief, Lambiase. This , he manages, without very much encouragement, thanks to the bundle of joy that is Maya. How will A.J. cope when Maya has to go into care of Social services? What will become of her? Will A.J. find love again?  Will the book store survive the arrival of a newborn and the winds of change?

Published by Little Brown in March this year, this is New York born Gabrielle Zevin’s (www.gabriellezevin.com) eighth book. More accustomed to writing for young adults, she’s written two books for adults in the past, Magarettown (2005) and The Hole We’re In (2010). Her young adult books include Elsewhere (2005), Memoirs of a Teenage Amnesiac (2007), All These Things I’ve Done (2011), Because It Is My Blood (2012) and In The Age Of Love And Chocolate (2013). Gabrielle is a graduate of Harvard and the screenwriter for the cult hit Conversations With Other Women – starring Helena Bonham Carter, she first got into writing after sending a strongly worded letter to her local paper about a Guns & Roses concert which lead to a job as a music critic.

Stories involving animals and or children tend to bring a lump to my throat, I knew from the moment I saw the cover and read the blurb on the back, that at some stage, I was going to need a tissue. This is a well written story which tugs at the heart strings from the moment Maya makes her entrance, to the emotional ending. Also it had me laughing hysterically at the antics of the main characters and also the support cast of Lambiase, Ismay, Daniel and the various other residents from the island who come to the shop regularly. This book is also  ripe for adaptation as a RomCom, ten to fifteen years ago it would have had Meg Ryan and Tom Hanks names written all over it, nowadays, Hugh Grant maybe with Drew Barrymore again, or Amy Adams and any number of potential leading men. 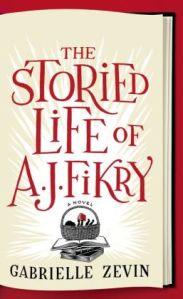 The chapters in the book are named after or at least dedicated to famous books, such as Lamb To The Slaughter and The Bookseller by Dahl as well as The Celebrated Jumping Frog Of Calaveras County by Mark Twain. Which I though strange at first until nearing the end I realised I wasn’t so much reading a story as a list of suggested reading material by Fikry for Maya or even a living will.

This has to be one of the best books I’ve read this year and is written by a smart witty young author, who knows how to plot a story and to keep the reader turning the pages right till the end. Even though it was a moving and memorable read to me, maybe to some of it could be seen as a bit sacchariny. There are a couple of plot twists which make you sit up and go wow and made the lower lip wobble slightly, such as the discovery of who Maya’s real dad is and also the depiction of a tragic road accident.

It’s an easy enough read at just over two hundred and forty pages long and closer to a novella then a standard book. This doesn’t take away from a truly satisfying and homely story. The blurb describes it as being a book for those who loved The Guernsey Literary And Potato Peel Pie Society and The Book Thief, while I see it more for those who loved Marley and Me and Secret Life of Bees. What the blurb doesn’t describe is that  the marketing people in the US saw fit to re title it The Storied Life of A.J. Fikry or maybe our marketing guys over here in Europe, thought the title needed to be a bit more high brow.

So there’s not much else to say but get down to your local bookshop and snap up a copy of this book. You won’t have to leave a newborn in the children’s section, just get friendly with a member of staff and leave some hard earned cash on the counter.