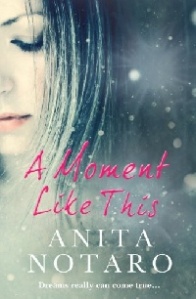 It’s always tragic when you hear of someone struck down in their prime or on the cusp of success. There are examples of this across the musical, acting and literary fields. For instance , Elvis, Buddy Holly, Richie Valens and the actors  River Pheonix and Heath Ledger come to mind. In the literary world we have in the past couple of years had the sudden death of Stieg Larsson, days after submitting the three manuscripts for the Millenium trilogy; Terry Pratchett diagnosed with early onset Alzheimer’s and then most recently in Ireland the news that acclaimed author Anita Notaro has been diagnosed with a rare form of dementia.

Her sixth and what is now her final book is called A Moment Like This. It tells the story of Antonia Trent a shy twenty-something and a carer for her stroke victim mother. They live in the County Wicklow village of Glenvarra. Her only social outlet is her participation in the local church choir and this is where we discover she has a natural talent – the voice of an angel as her friends keep telling her. When her mother dies suddenly she is thrust into a brave new world of having to fend for herself with out her only real companion, or so she thinks. But then the day after the funeral a letter arrives from the national TV station telling her she’s made the auditions for “That’s Talent!”, Ireland’s answer to the ‘X Factor’. Unbeknownst to her, the leader of the choir sent in a CD of Antonia singing.

What follows is a journey through the hectic world of the talent shows, seen from the perspective of the shy and naive. Along the way we meet a mixed bag of characters from the decent people who can’t do enough for you to the be-grudgers, hangers-on and twisted weirdo’s who all inhabit this world.  Some of the characters are cut straight from real life, such as Maurice Prendergast the reality show judge and music promoter who is basically the very loveable Louis Walsh down to a tee. Also thrown in for good measure is a romantic element involving a dashing young doctor.

This book has “decent and heart-warming” stamped all over it. “Chick Lit” it’s not because , whilst that’s a rather derogatory term that I could never use for this book, also it’s not’ mushy’ and keeps the reader engaged and gets you behind Antonia.  A Moment Like 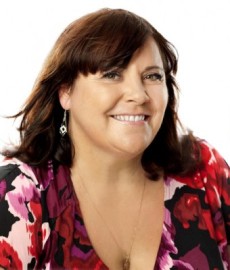 This stands out there with the likes of P.S. I Love You as an original tale or maybe even a modern day The Commitments. The story is ripped straight from that of Susan Boyle and Mary Byrne’s exploits, except that Antonia is younger and more representative of the hundreds of young girls and boys who queue up in their thousands each year for a lottery style chance to make it big. Not forgetting the wannabees who return year after year in the hope of getting somewhere. Anita has those types represented too, in the characters of Amanda and Damien.

If it were to be made for TV or film, I could conceivably see the lead being made more mature, with maybe Mary Byrne playing the lead, but don’t you just know that if push comes to shove, they’ll give it to some little known Irish pop starlet.

One of the most heart wrenching parts of the book is the acknowledgement at the end which is written by Anita’s husband, Gerry. It brings home the fact that this is her last book and reads sort of like a living will. It would take a very strong person not be moved by this glowing tribute to her many friends and readers.

So if you like heart warming stories of shy unknown talent finally making it big and going from rags to riches, and you missed Mary’s most recent gigs with Phil Coulter and The Susan Boyle Story on in a theatre near you. Then this book is definitely worth a read and even better at more than half the price of those tickets.

Anita’s previous books are: Back after the Break, behind The Scenes, The WWW Club, Take a Look at Me Now and No Ordinary Love.