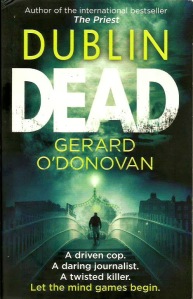 I’ve always steered clear of Irish crime fiction. I don’t know why really. Maybe it’s because I have the plots of a number of books inside me, that I don’t want to see already written about when I open up some Sunday paper hack’s latest attempt to fill the remaining hours of their days and weekends, when they’re not sleeping, eating, drinking or just catching up with the family.

I think it’s because when put up against the likes of Morse, Reacher, Bosch etc; they don’t have the same romanticism. I live in and visit the settings on a regular if not daily basis and find it hard to picture them in the same way as a Midwest American two horse town or the cobbled bicycle congested lanes of Oxford.

Back in February my partner gave me a copy of Gerard O’Donovan’s latest book “Dublin Dead” as a Valentines Day present. I think I gave her a voucher for M&S… Hmm, true romantics both of us… Anyway I let the book sit on my bedside locker as a reminder that it was on my TBR (To Be Read) list. Then as I ran out the door last week to my sisters wedding in Italy without anything to read, the love of my life suggested rather subtlety that I hadn’t read “… That book I gave you for Valentines”.  So into the bag it went, displacing Anita Notaro’s latest from a round trip to Lake Garda.

This is O’Donovan’s second book after “Priest”, both feature the Dublin DI Mike Mulcahy and Sunday paper journalist Siobhan Fallon. In “Dublin Dead” both are a year on from their encounter with a deranged priest who via back story we discover impaled Fallon on the papal cross in Dublin’s Phoenix Park. Now that’s what I call original and made me sit up and take note. Anyway in this outing Fallon is working through her Post Traumatic Stress on a dead end suicide story which then leads to a missing persons, while Mulcahy is following up the murder of a Dublin gangster in Spain and the link to the largest haul of drugs off the cork coast and the involvement of an internationally feared Colombian hit-man, while trying to prevent the closure of his Drug Liaison Unit by the end of the week. Soon both hero and heroine find themselves pursued and pursuers with a climactic finale in west cork.

O’Donovan’s own back story reads a little fantastically, he’s had a job in the Irish civil service, worked abroad as a barman, gherkin bottler and philosophy teacher…. Umm, if you can figure how you go from pushing paper in Dublin to pushing knobbly green veg into bottles, answers in the comments box below. I suppose teaching philosophy is similar to that of the gherkin bottler, you’re pushing knobbly shaped theories into empty vessels. 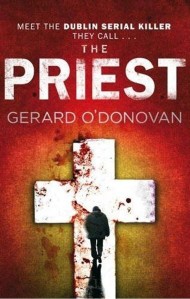 the pace is relentless to the end. The story line is topical, inspired by a recent botched drug run on a yacht off the south coast and with references to NAMA and the perilous state of the economy. Where it is disappointing is in the final confrontation, here it feels a bit limp and goes down a well worn path. For someone who had one of his lead characters crucified on a 116ft high monument over looking Dublin previously I expected a better ending and some more dramatic set pieces through out the book, but take my word for it this is well worth the read and probably even better if you start with “Priest” .